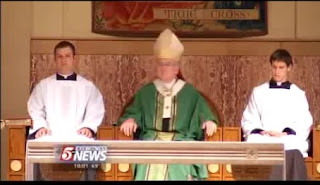 Critics say the mailing, from state bishops, is aimed at November voters. [Aren't we allowed to vote?]

More than 400,000 DVDs are being mailed to the homes of Minnesota Catholics on Wednesday, courtesy of Catholic bishops in the state who want to stop the campaign to legalize same-sex marriage in its tracks.

The 18-minute DVD includes an appearance from St. Paul and Minneapolis Archbishop John Nienstedt in which he says it is time for Minnesotans -- not the "ruling elite" of legislators and judges -- to vote on a constitutional amendment defining marriage as between one man and one woman. Thirty-one states have passed such an amendment.

"It is the people themselves and not politicians or judges who should make this decision," Nienstedt says on the DVD. "This is the only way to put the one man, one woman definition of marriage beyond the reach of the courts and politicians."

Gay advocates who have worked to change the Catholic Church's stand on same-sex marriage said that coming six weeks before the November general election, the DVD distribution is aimed squarely at voters.

"It's an effort to have Catholics vote the way the bishops want them to vote, but by and large Catholic voters are well-educated and they are independent-minded," said Brian McNeill, president of Dignity Twin Cities. The group for gays, lesbians, bisexuals and transgender people works to change what it calls the "antiquated sexual theology" of the church. "We would like to talk to the archbishop about it, but he won't talk to us," McNeill said.

Michael Bayly, executive coordinator of the Twin Cities-based Catholic Pastoral Committee on Sexual Minorities, said that because gubernatorial candidates Mark Dayton of the DFL and Tom Horner of the Independence Party support same-sex marriage, the chances are great that Minnesota could have a governor who supports what Bayly calls "marriage equality." He called the DVD "almost a last-ditch effort to try and influence Catholics to turn the election to ensure that doesn't happen."

"It would be really tragic if they succeeded, but I don't think they will," Bayly said.

The "educational packet" produced by the Minnesota Catholic Conference, which represents bishops covering the state, includes the DVD and an introductory letter from each local bishop. The video includes Nienstedt's six-minute appearance and a 12-minute video produced by the Knights of Columbus, a Catholic fraternal organization, warning of the damage that same-sex marriage will do to families, especially children.

The Knights of Columbus video includes appearances by a civil rights advocate who quotes the Rev. Martin Luther King Jr. and a Princeton University professor who says that the well-being of kids is threatened when they don't grow up in a traditional family. The video warns that if same-sex marriage becomes the law, public schools would teach that same-sex marriage is OK regardless of what parents think and that the religious liberty of Catholics and others would be threatened. It says that people who oppose same-sex marriage would be seen as bigots who could be prosecuted and that the accreditation of parochial schools and tax-exempt status of those schools and churches would be threatened.

Similar DVDs have been sent out in other states, including California and Maine, said Dennis McGrath, spokesman for the Archdiocese of St. Paul and Minneapolis. He said it was his understanding that the bishops jointly decided to send out the packets here.

"I think they felt the situation had gotten to the point that they had to do something," McGrath said. "They couldn't stand by and let this thing go any further. The same-sex marriage train was chugging ahead."

State Sen. John Marty, a Roseville DFLer who has authored proposals to make Minnesota's marriage laws gender-neutral, said Tuesday that he will renew those efforts if he wins reelection this fall. He said the bishops are free to express their opinions but that he believes that shifting public attitudes about same-sex marriage and gay rights have moved Minnesotans past the debate the bishops seem to want to create.

"I think the constitutional amendment push died about four or five years ago," Marty said. "Even the strongest proponents realize that it's time has passed, and it's not going to happen. Times are changing."

The church mailings were paid for with a private donation, McGrath said. StarTribune

They should also put the video online I think.

I agree with Badger Catholic-hopefully, the video will also be online.