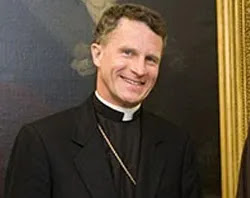 After receiving a letter from the group Catholics for Equality urging a change to the “Don't Ask, Don't Tell” policy, the Archbishop for Military Services responded, saying that the archdiocese's position is “clear.” The prelate added that the group “cannot be legitimately recognized as Catholic.”

Catholics for Equality had requested a meeting with Archbishop for the Military Services Timothy Broglio, claiming he offered misleading and false arguments in his June 1 statement against allowing open homosexuals to serve in the U.S. military.

Catholics for Equality Board Member Patsy Trujillo, a former New Mexico state legislator, said the group was confident that senators would vote to change present policy.

“Further, we trust our Catholic Senators will vote in their conscience and the will of the pro-equality Catholics in their state, and not the misinformed dictates of Rome,” she said in a Catholics for Equality press release.

On Tuesday the U.S. Senate blocked the bill that would allow changes to the “Don’t Ask, Don’t Tell” policy. While 60 votes were required to start debate, the final vote was 56 to 43.

In a Sept. 20 statement responding to a CNA inquiry, Archbishop Broglio said the Archdiocese for the Military Services has a “clear” position on a change in the present policy concerning the service of persons who “openly manifest a homosexual orientation.”

While his latest statement did not reiterate the archdiocese’s position, in a June 1 statement Archbishop Broglio opposed the policy change. Saying moral beliefs should not be sacrificed for “merely political considerations,” he explained that Catholic chaplains can never “condone” homosexual behavior.

At the time he also voiced concern that a change in policy might negatively affect the role of the chaplain in the pulpit, the classroom, the barracks and the office.

CNA’s inquiry to the archbishop recounted CNA’s previous report on Catholics for Equality.

The organization was founded by groups such as New Ways Ministry and Dignity USA with cooperation from the homosexual advocacy group Human Rights Committee (HRC). It aims to “support, educate, and mobilize equality-supporting Catholics to advance LGBT equality at federal, state, and local levels.”

It also charges the Catholic hierarchy with favoring discrimination and having an “anti-equality voice” that does not represent Catholics.

In his Monday statement, Archbishop Broglio explained that according to canon law a group may call itself Catholic if it has been approved by a bishop or recognized by the Holy See in some manner.

“It is doubtful that the group in question has such approval. Therefore, it cannot be legitimately recognized as Catholic,” he commented.

The archbishop also challenged any indication that the Catholic hierarchy does not represent Catholics.

“By definition that is impossible. The Body of Christ, as is clearly taught, is the Church united in communion: the hierarchy with the faithful joined with the Successor of St. Peter and untied to Christ our Head.

“Translating the language of political systems to the Church simply demonstrates a lack of understanding of what the Church is,” Archbishop Broglio commented.

He also insisted that Church teaching is based in love and truth.

“It is not the desire of the Archdiocese for Military Services to offend anyone, but there is an obligation to teach the truth in love, even when that truth is displeasing to some or politically incorrect to others. The Holy Father made that quite clear in Caritas in Veritate.”

Phil Attey, the present acting executive director of Catholics for Equality, is a former employee of HRC. Last year Attey created a website to “aggregate reports on every gay priest” in the Archdiocese of Washington to help them “stand up to the church hierarchy” on homosexual issues.