Franciscan Friars of the Renewal and Catholic League Team Up to Defend Christmas! 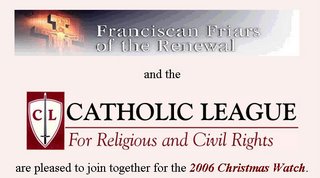 Every December sees its fair share of "Grinches," those retailers, schools, websites, towns and municipalities who refuse to acknowledge Christmas as part of the "holiday season." These Christmas kill-joys are all around.
This Christmas, the Catholic League, Father Benedict Groeschel, C.F.R. and the other Franciscan Friars of the Renewal have joined up to put the spotlight on these folks. Should you notice one of these Grinches, please let us know. You may submit the details either by faxing the Catholic League at 212-371-3394, writing to us at 450 Seventh Avenue, New York, New York 10123 or by e-mailing catalyst@catholicleague.org.
The entry below was named Supreme Grinch of the Week on Friday, December 1:
A curmudgeon in Warwick, New York, for kicking up a fuss about a “Breakfast with Santa” fundraiser held each year by the PTA of Sanfordville Elementary School. One parent claimed that the popular fundraiser, which is held on a Saturday and is completely optional, is offensive to non-Christians because it includes a visit from Santa Claus.

In an attempt to accommodate the parent’s concerns, the PTA agreed to change the name of the event to “Winter Wonderland Breakfast” and incorporate Hanukkah traditions among the activities. This, however, did not satisfy the parent who still took issue with the fundraiser, saying “This shouldn’t be just for one person or two person’s religions…I wanted to represent all, not just a few.”

The superintendent of Warwick schools had amiably offered to don a Frosty the Snowman suit in an attempt to add more winter-themed characters to the breakfast. His generosity, though, was not rewarded. He received a letter from a local attorney charging that “The District should, at a minimum, modify the events to avoid potential litigation.” The superintendent later indicated that he should have seen the problem with a “Breakfast with Santa” earlier on.
Posted by Unknown at 7:46 PM