.
When the fall semester was coming to a close, I thought to myself, "What am I going to do over Christmas break?" Many of us were asking this question and asking it of others. As it would turn out, 3 brothers from the seminary would join the two southern California transplants in the Golden State for a few days of sightseeing, warm weather, and brotherhood.

Our first highlight was attending mass at the newly built Our Lady of the Angels Cathedral of Los Angeles. 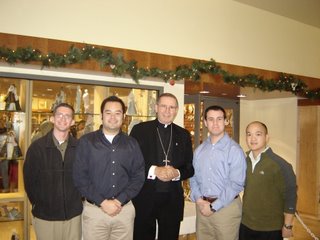 Much discussion is had by many people regarding the choice of architectural style. The general consensus of the group was that the cathedral has truly beautiful elements to it. As with most things in life, there are elements which caught our attention, and other which caught our attention for a different reason. After mass, there was an opportunity to meet Cardinal Mahony, who is coming to our archdiocese in January for conference on immigration. 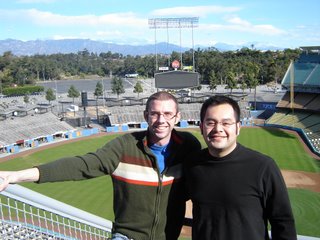 How could we not pay a visit to Dodger Stadium on a beautiful and warm morning? There wasn't a game that day, but from there, one can have a good look at the city around it. Frank was busy pointing out to us which scene in which famous movie was filmed here and there throughout Los Angeles. For this, Frank got the new nickname "Frankie-pedia," (a word play on the Wikipedia website).


Of all the things that Minnesotans have, but which is not quite like the real deal, is a beach. Sure there are only 10,000 lakes in the state, whereas California has only 1 ocean. Sure, there are beaches in MN, but none of the beaches are like they are in California! We rolled up our jeans and stood in the Pacific Ocean, watching a truly golden sunset. We even prayed Evening Prayer on the shore to wrap up the day.


Lest the brothers think that California has completely lost its Catholic heritage which is so much a part of its history, we had the chance to visit Mission San Gabriel, one of the 21 Spanish missions established all along the coast of California by Blessed Junipero Serra, most of which are still operational today. Father Junípero Serra was considered by his contemporaries to be an exceptionally devout missionary with great courage, remarkable intelligence and persistence. On the birthday of Mary, September 8, 1771, under Fr. Serra's direction, Fathers Pedro Cambón and Joseph de la Somera founded the San Gabriel Mission.

There was also the opportunity for them to meet the some of the Sisters of the Society Devoted to the Sacred Heart, whose sisters, as an Apostolic Religious Institute, areprimarily involved with teaching the truths of our faith and in making the Father and His love known. Their "Joyful Apostolate" flows from their daily and personal union with Christ.

All along the way, there was good food, good laughter, a few episodes of a favorite TV-medical drama House, good prayer time (much needed after the long semester). Isn't this what brotherhood is all about? Stephen of Future Priests of the Third Millenium
Posted by Unknown at 6:04 PM