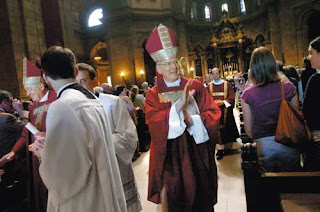 The future leader of the Catholic Church in the Twin Cities got to the point a few minutes into his homily.

He is not coming to divide the Catholics of the Archdiocese of St. Paul and Minneapolis - his mission is to unify the faithful.

"Much ink has been spilled in the press over speculation about how this new coadjutor will differ from the present archbishop," Coadjutor Archbishop John Nienstedt said during his welcome Mass on Friday at the Cathedral of St. Paul. "But frankly, I believe that speculation is misplaced."

About 3,000 people filled the cathedral - including more than 300 priests, two cardinals, innumerable archbishops and bishops - for the 2½-hour Mass that marked the beginning of the transition from Archbishop Harry Flynn's leadership to Nienstedt's. [Plus more Fourth Degree Knights of Columbus than anybody around here had ever seen, several squadrons of Papal Knights and their Dames, a phalanx of seminarians and many representatives of Nuns and Brothers. More could have attended if the Cathedral, one of the largest in the U.S. were larger. ]

"This is historical," said Bob Cardinal, a volunteer handing out programs to worshippers. "You have cardinals, bishops. The whole foundation of the church is here. It's huge."

Nienstedt, 60, will work with Flynn, 74, until the archbishop's retirement next year. Then Nienstedt takes over spiritual leadership of the archdiocese, including its 495 priests and 646,000 parishioners.

The thrust of the Mass was about inclusion, not only in its message but in its language: A Gospel reading was in Vietnamese, a Psalm was sung in Spanish, and a section of the petitions included recitations in Tagalog, Nigerian, German and Gaelic.

Nienstedt even wove a greeting in Hmong - translated to "the Lord be with you" into his homily.

After Pope Benedict XVI's apostolic letter appointing Nienstedt as coadjutor archbishop was read, the crowd gave him a standing ovation. One woman hooted, while another jumped up and down until she doubled over from the excitement.

The atmosphere surrounding the event was almost like a festival, with volunteers directing hundreds of cars through the Cathedral Hill neighborhood while a couple dozen worshippers sang, clapped and beat tambourines outside the cathedral.

Friday's celebration contrasted with April's announcement that the former bishop of the Diocese of New Ulm, Minn., would fill the post. Some speculated Nienstedt's theologically conservative approach would clash with more progressive views held by Catholics under Flynn's guidance - especially on issues like homosexuality and women in the priesthood.

But Nienstedt tried to quell those concerns during his welcome Mass.

"Leadership in Christ's church should not be about the differences in personality or administrative styles, but rather about our commitment to the message and mission of the Lord Jesus," Nienstedt said.

The future archbishop used his homily to pledge support for Catholic schools, the sanctity of life and careers in the

About 3,000 people, including some 300 priests and higher clergy, attended the Mass, where Nienstedt pledged to work for unity. (JEAN PIERI, Pioneer Press)
archdiocese.

"My mission, our mission, Christ's mission is to promote a culture of life and to build a society of justice and peace," Nienstedt said.

The congregation took the message to heart.

"If the fear is that he's going to throw us back into the Dark Ages, that's a misconception," said Tom Kneissel, a parishioner at St. Bernard's in St. Paul. "If anything, he'll lead us closer to the faith."

John Paul Morgan, a St. Paul seminarian, said he felt emboldened by Nienstedt's support of young men looking to get into the priesthood.

"It's a great blessing to have a shepherd who's dedicated to promoting vocations in the archdiocese," he said.

Church dignitaries, such as Cardinal Adam Maida, of the Detroit Archdiocese, and Cardinal Justin Rigali, of the Philadelphia Archdiocese, were joined at the Mass by local public figures, including Laurie Coleman, wife of U.S. Sen. Norm Coleman, and St. Paul Police Chief John Harrington.

Flynn ended the Mass with a wish for Nienstedt's future in the archdiocese: "May your years be as happy as mine have been since I've become a priest."

The Mass was followed by a reception at the "old Radisson Hotel" downtown St Paul, well attended with an exceedingly long reception line for our new shepherd. He'll probably need physical therapy on Monday. A Tip of the Hat goes to the Chancery for pulling off the logistical feat of getting busses for more than 1,000 people to move folks the half mile to the hotel and back to the parking lots. Net Ministries and St Paul Outreach volunteers cheerfully managed the crowd. No swords were needed from the attendant Knights to keep the happy Catholics, many from New Ulm and Detroit (where Abp Nienstedt was first a priest and Auxiliary Bishop) in line.

Mary from Veritatis Splendor (the Roamin' Roman herself) has a link to Archbishop Nienstedt's homily and some nice comments on it and the Mass and Reception.

Mary's Photographs from the Mass and a couple from the Reception

Ray: Interesting observation about the CS...

Though I bet (hope) they will do another story after the fact..