.
Ruth Gledhill: The indult is on its way, to be published 7 July. Some senior bishops already have it. Meanwhile, I am trying to check out a bizarre rumour I've heard - I stress it is just a rumour at present and really barely bloggable, never mind reportable - that Pope Benedict plans on reviving the ancient office of lay cardinal. Further, that the first two lay cardinals appointed will be our own Tony Blair, and France's Jacques Chirac. The picture shows Giacomo Antonelli, one of the last of the lay cardinals 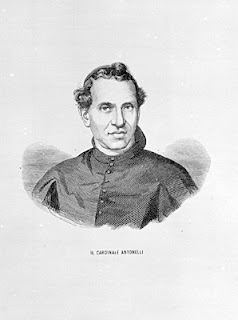 I'm knowingly 'flying a kite' here but it would be an extraordinary story if true.

In the meantime, here in the UK we on the religious frontline are already feeling the impact of Gordon Brown's move into Downing Street. Those who griped that Tony Blair, for all his outward devotion, was unsound on certain Catholic doctrines as expressed in areas of public policy, must now be wishing for the 'devil they knew'. (Update: I asked a friend to look into the lay cardinal rumour. I could never have anticipated the level of truth they discovered in the rumour, and the machinations behind the rumour. It also clarifies a point for me made clear in Martin's comment, below. This is what my friend tells me: 'I have a suspicion that there is a plan for lay cardinals, both to empower the laity but also to hold out to the prospect of serious office to laity, so that some would not make their careers as dissidents. Chirac and Blair maybe being suggested to ruin the plan.')

Teodolfo Mertel, pictured here, was the last one. The idea has been around for a while, I'm told. Jacques Maritain was suggested at one point. It is possible the idea is being put about by some in the Community of Sant'Egidio, although this is not how it reached me. This is a public lay evangelisation movement with more than 50,000 members founded in Rome in the 1960s by Andrea Riccardi, then a student. He is known colloquially as 'the Lay Cardinal of Rome'. Tony Blair is known to have close contacts with this community. Conservatives in Rome will oppose lay cardinals, however, because of the danger of clericalising the laity. Also, in the modern world, would even the Catholic Church be able to resist a demand for there to be women lay cardinals? Too much to hope for that it would embrace it I suppose. Women cardinals in Rome in my lifetime, what a dream. Sounds good, doesn't it, Cardinal Ruth Gledhill? Cardinal Libby Purves? See what I mean. In another century perhaps. Rome has enough troubles with the pseudo-clerical laity already, without giving them (us?) red hats to go with it.

But never mind Rome for the moment. These are exciting and challenging times in Britain. There is no Secretary of State for Religion, but religion manages to stay up there on all the agendas. And there is one notable feature that all Gordon Brown's appointments have in common. They are all incredibly, formidably bright.

Our transport correspondent is already considering the impact on his work of the hard-to-read Ruth Kelly. Personally, I am wondering if there is any way I can use my religious contacts to persuade her to change the signposting on the A4 out of London so that all the M3 traffic doesn't get diverted past my front door in Richmond. (Just kidding.)

But I'm thinking primarly of Alan Johnson's move to health.

Mr Johnson was Education Secretary when the churches' lobbying, primarly the Roman Catholic Church's lobbying, scuppered his proposal to impose a 25 per cent 'other faith or no faith' quota on faith schools. I doubt he's forgiven them. The mood in the country, after months and months of campaigning by Life charities, has seemed to be one of lowering the abortion limit and generally tightening up the law. That momentum, some fear, could now be lost.

Here is what SPUC are saying this morning. They fear he will 'support wider provision of abortion and other anti-life practices.'

Soon after becoming a member of parliament in 1997, Mr Johnson signed two parliamentary motions, one defending an alleged "woman's right to choose" abortion and another condemning "restrictive abortion laws". In 2000, Mr Johnson voted in favour of stem cell research on cloned embryos. In 2004, Mr Johnson voted against pro-life amendments to the Mental Capacity Act, which according to SPUC "enshrined in statute law euthanasia by omission."

Anthony Ozimic, SPUC political secretary, said: "We fear that, if abortion is introduced into the debate when the government's draft Human Tissue and Embryos Bill comes before parliament, the government will give at least tacit support to amendments to extend abortion provision. Whether or not the government grants a free vote to backbench MPs, past parliamentary experience proves that signals of the government's opinion heavily influences the way backbench MPs vote. Pro-life parliamentarians should therefore not attempt to open up the abortion law on the floor of Parliament whilst a government-backed pro-abortion majority holds sway, lest there be a repeat of the 1990 defeat of the pro-life lobby."

In a way, it is a shame that Tony Blair did not convert while in office. I fear it might be many more years before we get the chance to have a Catholic Prime Minister in Britain. Not that I'm any apologist for Rome, far from it. It just does seem to me a scandal we've never had one. And equally that we've not had a Jewish one. Now that's a thought. Maybe that's a rumour I could start, Gordon Brown about to convert to Judaism? I don't think so somehow, although there is still gossip going about that Margaret Thatcher was tempted that way.

Still, that's enough on the rumour front for now. Time to get going on establishing the facts about that elusive indult!
Times of London (and check out the comments!)