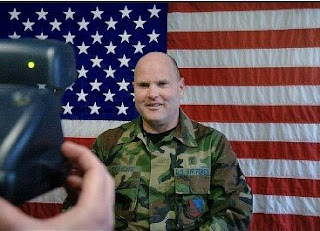 Within minutes of the concluding rite, the Rev. John Paul Echert III shed his vestment, exposing his battle dress uniform underneath. He said his farewells to several parishioners who attended Sunday's 7 a.m. Mass at St. Augustine Catholic Church in South St. Paul and went out the side door.

He was in a hurry, because by 9 a.m., he had to begin celebrating Mass in the chapel at the 133rd Air Lift Wing, adjacent to Minneapolis-St. Paul International Airport, something he has done for local Air Force Reserve or Air National Guard units for 21 years.

"It can be quite the balancing act," Echert, a lieutenant colonel, said of his civilian and military ministry work.

There will be no letting up for Echert, who on Tuesday will be deployed to serve a monthlong stint as a military chaplain at Landstuhl Regional Medical Center in Germany, the main hospital for wounded U.S. and allied force troops serving in Iraq and Afghanistan.

Echert said his deployment — his fourth overseas — will be hands on, meaning he will help offload the stretchers as they arrive on a bus from Ramstein Air Base; he will be among the first to speak to the wounded troops; and he'll follow up with them daily through the duration of their stay, which is typically a week or two, before they are flown to the U.S. or elsewhere for further care.

A former active-duty Air Force member, Echert, 50, considers his military chaplaincy — at the home base and overseas — a call within a call.

"I do it, first of all, to be able to serve as a priest to men and women in uniform," he said. "Having been first enlisted and now an officer in the Air Force, I've always felt a special bond with military people. I see their integrity, I see their willingness to sacrifice."

Echert had two main interests growing up in southwest Minneapolis: the priesthood and the Air Force.

At his request, his mother took him on a visit to a local monastery when he was 5 years old. Meanwhile, his father served in World War II and the Korean War as an engine mechanic on B-29 bombers, including the Enola Gay, the plane that dropped the first atomic bomb on Hiroshima, Japan, in 1945.

"I always wanted to be a priest," he said, "and at the same time, I was studying my father's old B-29 aircraft manuals."

After graduating from Benilde-St. Margaret's in St. Louis Park in 1975, he enlisted in the Air Force at 18 and was stationed at Andrews Air Force Base in Washington, D.C., where he trained for four years in communications and electronics. He said a yearlong military mission on a remote mountaintop in Turkey made him realize he was ready to pursue the priesthood.

He spent the next eight years studying in the seminary at the College of St. Thomas in St. Paul and at the St. Paul Seminary.

His two worlds came together for the first time, he said, while he was working as an assistant with active-duty Air Force chaplains during summer breaks. Shortly after being ordained in 1987, he began serving as an Air Force Reserve chaplain with the 934th Air Lift Wing on the base that adjoins MinneapolisSt. Paul International Airport, while also serving as a priest at St. Rose of Lima Catholic Church in Roseville.

In 1990, he was assigned to the faculty of the University of St. Thomas, where he spent the next 15 years teaching Scripture. He became the Catholic chaplain for the Air National Guard unit in 2000. 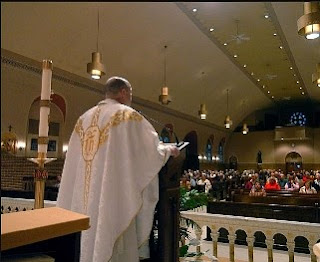 St. Augustine Church always has been one of the largest Latin Mass communities in Minnesota, with about 500 people attending the 11:30 a.m. Tridentine Mass, a Roman Catholic liturgy that dates to the 1500s and is celebrated in a limited number of parishes with Vatican approval.

So, when the church needed someone to run it in 2005, Echert — one of a handful of priests in the state who is fluent in Latin — accepted Archbishop Harry Flynn's invitation. Echert also took on pastoral duties at Holy Trinity Catholic Church in South St. Paul.

Echert said his parish ministry prepares him for military deployment.

"We, as priests, do deal with death and suffering and spirituality on an ongoing basis in the civilian world. It's just more intense in the military than we find in the parish," he said.

Echert has been on three deployments since Sept. 11, 2001, including a month in desert tents in Kuwait in 2001 and four months in Qatar in 2002 leading up to the Iraq war. Last year, he spent a month at Landstuhl Hospital.

He said he saw very little self-pity among the veterans at Landstuhl.

"The thing that I found incredible is, the more severe the injury to the wounded warriors — and that's what we call them — often the less they thought about themselves," he said. "They were more likely to be feeling guilt that they had been taken out of the battlefield, or they were grieving the loss of one or more of their comrades who had died in whatever caused them their injuries, and some of these injuries included loss of limbs."

Once home, Echert makes the transition smooth for local airmen dealing with life's troubles before and after deployment, said Col. Greg Haase, the unit's commander.

Just before the 9 a.m. Mass was to start in the chapel, Echert saw an airman jogging, trying hard not to be tardy. "You're not late if you beat me to the doors," Echert, who serves Mass on the base once a month, said to the smiling airman.

After Mass, which was attended by about 40 service members and some of their families, Master Sgt. Brenda Jacob said it's not uncommon for Echert to use humor to help start a conversation.

"We're really blessed to have Father Echert," said Jacob, who plays the organ in the chapel. "He's a very busy person, but he always seems to come through. When you request something from him or need to talk with him, he's always there." Pioneer Press

He is such a good priest - I trust him more than any other I know.

Dear Ray,
I couldn't figure out how to post a message to you directly. This is Paul Haverstock--I met you tonight at St. Agnes after Mons. Schuler's Memorial Requiem Mass.

I wanted to pass along that information I mentioned about the decision at St. Thomas Law School to disallow service hours from Planned Parenthood...
If you give me your email (by emailing me), I'll forward you the message we got from the Dean today.

My email address is ilikelatin@yahoo.com