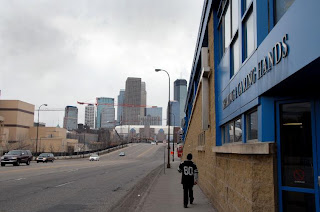 It would seem that the situation has a lot to do with the new ballpark.

The actions being taken by the city of Minneapolis with reference to Sharing & Caring Hands raise a number of questions that the city leadership needs to address:

•If the alleged drug problem at Sharing & Caring Hands has been so bad for so long -- described by the city as "chronic" -- why was there no crackdown until the building of the new baseball stadium?

•Why have two former Minneapolis police chiefs supported Sharing & Caring Hands and not felt that it was a danger to public safety? And if it is now such a threat, why hasn't the current chief ever visited it? Is it possible that some members of the police force resent Mary Jo Copeland's criticism of the roughness with which they sometimes treat the poor?

•If the alleged drug problem is as bad as claimed, why are there more arrests in the vicinity of other shelters -- including such reputable facilities as Catholic Charities and the Salvation Army? For what reason, other than that it is next door to the new stadium, is Sharing & Caring Hands being targeted for punitive action? Many drug deals occur in public parks and on buses and even in libraries; why doesn't the city act to close them? Is it because they are considered essential services, and it is worth the risk to keep them open for the greater good of the community? Why wouldn't Sharing & Caring Hands fall into this same category?

•If the current action truly has nothing to do with the new baseball stadium, what is the city going to do to counteract that belief among the many poor people served there? Is the city aware that these people see themselves as being swept under the rug so as to either not embarrass fans on the way to the games or to make way for commercial development aimed at those fans? And is the city not concerned about this perception?

•Why haven't the mayor and City Council members ever toured Sharing & Caring Hands and spent time analyzing the situation?

•Is it logical to think that Mary Jo Copeland would have dedicated 26 years of her life to helping the poor and not care that drugs are freely traded? Does the city think that she has not seen -- more than elected officials -- the devastation caused by drugs as she has been "in the trenches" they have refused to visit?

•If dangerous criminals are so prevalent on the grounds, why do the thousands of volunteers who assist there report that it is a wonderful, safe, clean and joyful place? If it is unsafe, why do government agencies daily refer so many people in need to Sharing & Caring Hands?

•Why haven't any of these purported problems affected the approximately 400 children who live at Mary's Place and think that it is much safer than staying at other shelters or in government housing?

•Since the maintenance garage for the police force is also on that block, doesn't it say more about the city government that the alleged drug dealers have been loitering outside the police garage?

•If the Sharing & Caring Hands food service is stopped, do you think that poor people deprived of free, hot, nourishing meals are more likely to cause a decrease or increase in crime?

•Other shelters are already near capacity; where should these hungry people go to eat? Many other shelters don't allow walk-ins off the street but serve only those who have a registered ID; are all poor people supposed to have a membership card, as if joining a country club? A great number of homeless people are mentally ill; how can the city reach out to those who don't understand or trust such rules?

•Is the city prepared to make up the difference and start providing 1,000 free meals per day for the poor? If so, where? When? And how will the city do a better job of security?

•If there is "nothing in the budget" for such a service, what does it say about our priorities that there are millions of tax dollars going for the building of the new baseball stadium? Is the city aware that Sharing & Caring Hands provides those 1,000 free meals and a whole range of other helpful services each day without ever accepting a penny of government money?

•Since the economy is struggling with job layoffs and the mortgage crisis, does our city need less or more in the way of assistance for the poor?

•Mary Jo Copeland has been praised by national and international leaders such as the president of the United States and the pope; why does the current leadership of the city of Minneapolis never express gratitude for her heroic work?

The Rev. Joseph R. Johnson is rector of the Cathedral of Saint Paul. StarTribune

When my brother-in-law ran a business next to S&CH, his impression was that the police had a "hands-off" policy regarding things that went on there. At first I thought that was the City of Mpls offering some sort of misguided liberal "compassion" by leaving them alone. (I know, it doesn't make sense, but I stopped trying to make sense of liberal policies a long time ago.) But now this story coming out has made me realize: the City (and most liberal politicians) secretly HATE S&CH because it accepts NO government money and actually helps the poor, making society less dependent on government. S&CH actually shows how government money IMPEDES people from legitimately and simply helping people in need. The police neglect of S&CH area has not been benign, but malignant, to the point where S&CH has to provide its own volunteer security. The liberal politicians (depsite what they SAY) want S&CH to fail so they can close it down and increase the number of unhelped homeless and needy people on the street, so they can more legitimately cry for tax increases and bigger government. So what the City of Mpls. sees with the Twins stadium being built there is an opportunity to close S&CH down in order to further its own big government liberal agenda.

Thanks to Father Joe Johnson for making all this obvious without even having to say it, just by asking the questions. He is a true master teacher.

And thanks be to God, the politicians have failed and Mary Jo can continue to feed the poor, with our help.

Geometricus: I pray you are wrong, but, I have to agree that the silence of the liberal city on this issue is baffling to me unless there is some nefarious purpose behind it.