Guess who's headed to Rome? 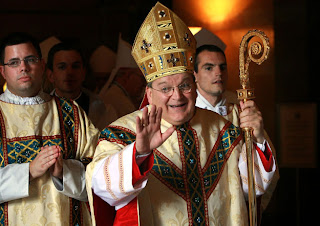 .
La Crosse's Bishop Raymond Burke, St. Louis' current Archbishop, held his final Mass in St. Louis today, as he is set to leave for Rome to become the head of the Vatican's highest judicial court, the Apostolic Signatura. More red is probably in his future when the Pope selects the next batch of cardinals.

Archbishop Raymond Burke celebrated his farewell Mass today at the St. Louis Cathedral Basilica -- a goodbye to the archdiocese he presided over for more than four years. The St. Louis Roman Catholic community returned the sentiment, sending Burke off in grand style.

Well-wishers packed the Basilica, which holds more than 1,200 people, some standing in the aisles and watching on a large-screen TV.

A 15-minute opening procession included ethereal choir music, incense and the colorful uniforms of various Catholic organizations. Seven bishops, including those from the dioceses of Jefferson City, Kansas City-St. Joseph, Springfield-Cape Girardeau and Springfield, Ill., concelebrated the Mass with Burke.

The archdiocese's priests and seminarians processed with Burke before the Mass.

Standing high above his former flock, wearing a golden mitre and carrying a golden crosier, Burke spoke. In his homily, Burke said in his "relatively brief time" in St. Louis, God "never ceased to increase my pastoral love for you.''

At the end of his 20-minute sermon, the crowd gave Burke a standing ovation.

Burke is scheduled to leave St. Louis later this week. . . .

The timing of Burke’s transfer to the Vatican — not even five years into his tenure in St. Louis — was more of a surprise than the position itself. The archbishop, widely acknowledged as one of the most accomplished canon lawyers in the world, worked on the staff of the Vatican’s high court, called the Supreme Tribunal of the Apostolic Signatura, for five years before being named bishop of LaCrosse, Wis., his home diocese, in 1995.

The Signatura is an appellate court that hears disputes among Vatican tribunals and offices. In 2006, Benedict named Burke to be one of the 15 judges on the Signatura.

In an interview with the St. Louis archdioce's newspaper published last week, Burke that when he first arrived in St. Louis in 2004, he saw how "strong" and "welcoming" the Catholic community here was.

He said he hoped his successor would continue his work with the infrastructure and growth at Kenrick-Glennon Seminary. He said he hoped more progress will be made in repealing the 2006 amendment to the Missouri constitution that protects all forms of stem cell research allowed under federal law, and in "mak(ing) our schools more truly Catholic." St. Louis Today