Stained Glass Windows - the most overlooked of Church artifacts

.
Stained glass windows date back to the Middle Ages (the year 1000 or so) and the construction of the large Gothic cathedrals of Europe. The windows (and the statuary) were designed to portray Old and New Testament stories to congregations, both rich and poor, well born and peasant, were for the most part illiterate. Monks and scholars (most of whom were monks) were generally the only people who could read and write in those days.

Even after the invention of movable type in the 15th century, and the printing of books in large quantities, reading among the populace did not become common until the 18th and 19th centuries. Churches continued to use stained glass to tell religious stories.

Today, with almost universal literacy in most countries, stained glass continues to be used in the construction of most churches, but the perceptive viewer will note that they no longer tell stories as they did in the past. No doubt the cost of stained glass also has something to do with that. Most new churches include clear glass in their original construction specifications and then as the original debt begins to be paid off, interior decoration and stained glass are added to the building.

Anyhow, all this is preparatory to listing some links of beautiful stained glass found in nearby churches that I ran across on the Flickr photo-sharing website on the Internet today. 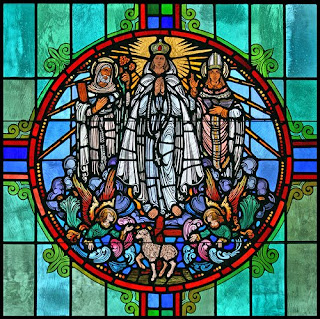 The Blessed Mother, St. Joseph and St. John the Evangelist
Our Lady of Knock 1879

Shrine of Our Lady of Guadalupe, La Crosse, Wisc.

Cathedral of St. John the Evangelist in Milwaukee, Wisc.

Basilica of the National Shrine of Mary, Help of Christians, in Holy Hill, Wisc.

Cathedral of Christ the King in Superior, Wisc.

The Cathedral and Shrine of St. Paul in St. Paul

Basilica of St. Mary in Minneapolis

And many more regional churches, photos taken or assembled by someone named "Jeff"
and Here

Those are great, Ray, thanks for posting them! I'm bookmarking these, for sure. I just adore stained glass. These are particularly good examples, too.

Just wondering about that St Thomas Moore which was formerly St Luke's. Why did they switch the Saint/name of the parish? Strikes me as odd!

Thanks for the nice words, Gette! I'm a big stained glass fan also.

In what was a relatively quiet event, that didn't come to my attention til long afterwards, but not entirely without upset folks, St. Luke's merged with the Immaculate Heart of Mary parish a half mile down Summit Avenue, a much smaller, but more solvent parish, I've been told.

The archdiocese has a committee now working on a major realignment of parishes that has a report due sometime in 2010. I don't know whether that will be messy or not.

There are already quite a few parishes "paired" in both Minneapolis and St. Paul with shared pastors.

But there are towns like Stillwater and Shakopee, freestanding communities, now suburbs, that have two or three parishes quite close to each other, dating back to the days of Irish, German and ?, parishes.

I'm certain that our chancery has been following the news reports of merger attempts in Boston, Cleveland and other Eastern U.S. dioceses and will attempt to avoid the tumult that was created there.

Boston still has a "sit-in" going in one parish after a couple of years, I believe.

The demographics have changed. People no longer walk to church. The ethnic groups have mostly moved away and 70% of Catholics don't go to Mass regularly anyway. Those are the kinds of things that the archdiocesan committee has to deal with.

Ah, a merger. I should have figured that one out! Thanks for the explanation :)

Someone commented to me that the name of St. Thomas More was picked because they are just down the road from William Mitchell Law School.

If not true, it is a plausible "urban legend."

I once tried to look at St. Luke's web page but they have it restricted to "members only", believe it or not. Kinda like the Masons or the Illuminati, maybe?