The Cadet Colonel: A student, a cadet, a leader to the corps 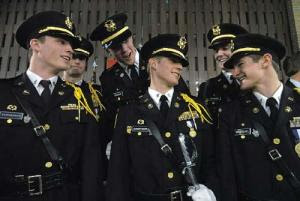 It finally hit home for Nate Schwartzbauer while he was writing an acceptance speech for an honor he wasn't sure he would even get: How much it would change his life if he did.

The St. Thomas Academy senior knew all about the history and prestige of the highest post at the all-boys' Catholic military prep school, about the duty of preparing the corps of cadets for a formal military inspection, speaking to the student body every morning and counseling struggling underclassmen.

But when he started putting words on paper -- in a speech where he would call becoming the school's 100th cadet colonel "truly the greatest honor I've ever received" -- Schwartzbauer realized all that responsibility could soon be on his shoulders.

"It's not something where it's a ceremony and everybody goes home," the Chaska native said. "It's a good moment, but there's a lot of work to do."

Schwartzbauer, named the 2007-08 cadet colonel Wednesday in the school's traditional day-before-Thanksgiving ceremony, assumes a role like few other student leadership positions in the state.

The post is unique to Junior Reserve Officer Training Corps programs. Only 13 of those exist in Minnesota, and St. Thomas is the only all-boys military academy in the state.

And because of that, the St. Thomas cadet colonel oversees more than just a co-curricular activity, which JROTC programs are at some schools. He is in charge of more than 1,000 students from ninth to 12th grade.

"These will be the movers and shakers," said retired Lt. Col. Michael DePuglio, who oversees the school's military program as the commandant of cadets. "A good chunk of them go on to do important things."

The job doesn't resemble that of a class president, which also exists at St. Thomas. It is much more formal -- and a lot more intense.

The cadet colonel is chosen from among 16 seniors who start the year as junior officers holding leadership positions in the corps.

School administrators choose six junior officers each fall to promote to lieutenant colonel, and one of them is appointed cadet colonel, based on his academic, military, co-curricular and disciplinary record and his public-speaking ability.

The job has plenty of official functions, but the unofficial ones are no less important.

"Every single underclassmen looks up to you," Schwartzbauer said. "You've got to be the guy at every game, supporting your classmates."

Said Alex Schneider, one of the lieutenant colonels: "You see the cadet colonel as the go-to guy. Initially, I wanted to be the big man on campus. As a senior, you have different reasons. You want to be a true leader."

There is, however, some pageantry.

The cadet colonel receives the Fleming Saber as a symbol of his authority. The sword was named for Capt. Richard Fleming, a 1935 graduate who received the Medal of Honor posthumously for heroism in the Battle of Midway during World War II.

Thirty-three previous cadet colonels attended Wednesday's ceremony, stretching as far back as John Frankel, who graduated in 1943 and is the school's oldest living cadet colonel.

"In those days, we did not have the fancy ceremony," said Frankel, 82, of Mendota Heights. "I got a letter in the mail in late August of 1942 notifying me I had been appointed cadet colonel, and that I had to show up at registration with the proper insignia. I had to borrow the chevron from my predecessor."

Military in future for some

Five of the 16 junior officers said they're considering some form of military service, including Schwartzbauer, who has dreamed of attending the United States Military Academy at West Point since he was in junior high.

DePuglio said 10 to 15 percent of St. Thomas graduates receive an ROTC scholarship or attend one of the service academies, but those who do are doing so on their own. He'll help them with their applications if they ask, but he said he does not recruit for the military.

Schwartzbauer's stepfather, Rodd Johnson, was a sniper in the Army from 1982 to 1991. He said even in eighth grade, his stepson picked St. Thomas because he figured it was the best way to get to West Point.

He is not afraid that possibility could land his stepson in combat.

"His view, and mine as well, is not everybody can stand by," Johnson said. "It's not like any of us can live forever. Not that you want anything bad to happen, but his faith does drive him."

As for Schwartzbauer, who said he grew up idolizing military officers instead of athletes, the idea of being in the middle of the action is what he has waited for.

You get the feeling his journey begins now.

"To put your life on the line for something bigger than yourself, there's nothing greater than that," he said. "It's a lot like being cadet colonel. You have to look out and take care of a group of men." StarTribune