.
Please pray for our forces on duty, our wounded,
our fallen and our veterans, especially
Father Tim Vakoc 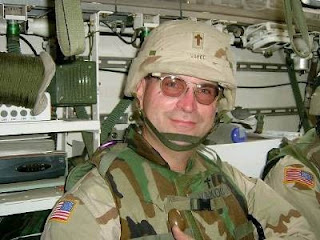 .
Ministry of Intentional Presence
"I live with (the soldiers), work with them, eat with them, care
for them, listen to them, counsel them.
The soldiers know if you are real and genuinely care or not.
The soldiers see me out there with them, and that makes a
difference."

Army Chaplain on Why

Our Fallen Soldiers Won't Be Forgotten

After some moments of private prayer, soldiers begin to gather at the ecumenical memorial service that I lead as a U.S. Army chaplain. The symbols of our battlefield memorial speak to the deeper sentiments of our soldiers. The helmet and identification tags signify the fallen soldier's identity. The combat boots represent the final march of his last battle. And his inverted rifle with the bayonet stuck in the ground signifies a time for prayer — a break in the action to memorialize this fallen soldier's ultimate sacrifice.

As we pray for the fallen and eulogize them, tears roll down the distraught faces of the silent soldiers. The moment of painful truth comes when the roll call begins. The Command Sergeant Major stands before the congregation and shouts out the names of soldiers in the unit. After each name, a soldier stands up and says, "Here, Sergeant Major."

There is a moment of silence. Then a three-gun salute is followed by Taps. This becomes a profound and sacred time for all of the soldiers. As a chaplain, I am pleased to lead these brave men and women in saying their final farewell to their comrades in arms who died in a firefight near Shkin, Afghanistan.

Preparing Soldiers for Battle
Tragically, this scene has taken place several times during my nine-month deployment out of our base in Kandahar, which has seen a lot of action.

Every time I gather for such a memorial service and celebrate a separate Mass for those soldiers who were Catholic, I draw upon the spirituality of our Marian Founder, the Venerable Servant of God Stanislaus Papczynski, who will be beatified on Set. 16. He reportedly ministered to soldiers dying on the battlefield in his own day and called our Congregation of Marians to offer our very lives for the victims of wars. My soul, like his was, is filled with anguish to see young men and women cut down in the flower of their youth for such a noble cause — the defense of one's country and, in our day, an end to the scourge of terrorism.

Like our Marian Founder, I know that one of the most important persons on the battlefield is the chaplain, standing side by side with the soldiers who are in harm's way. For many soldiers, this is the first time that they are confronted with the reality of death and the conviction that the values we hold dear are worth fighting for.

I see the soldiers quickly bond to each other during this challenging time that will shape the rest of their lives. They become aware that they possess a spirituality that is starting to come alive, hungering for prayer and direction. All of a sudden attending Mass, going to confession, reading the Bible, and saying the Rosary have new meaning for them.

For this reason, it is very important that my ministry team and I are in contact with our soldiers whenever they are preparing to go into battle. I circulate among them while they are in the staging area, arranging their gear, inspecting their weapons, and receiving the final briefing on their mission. Soldiers tell me stories about their families — how much they miss their wives and children. They ask me, in case anything happens to them, to make sure that their family knows how much they love them.

Then comes the moment when the call is made for the soldiers to line up and get ready to board their assigned helicopters. Just before boarding, the Brigade Chaplain calls all the soldiers to prayer. Each chaplain serving under him has a part in this brief service to read Scripture, to offer prayers for protection and success, and to call to mind our sacred duty in protecting the world from terrorism.

At the conclusion, the Brigade Chaplain announces that any Catholic soldier is invited to come to me for confession and to receive Holy Communion. They are eager. And after I have administered the Sacraments to them, I see confidence and peace on their faces.

Expect the Unexpected
We also learn to expect the unexpected at our fire base in Orgune, within eyesight of the Pakistani border.

One Thursday morning in summer, I am saying an outdoor Mass on an altar made up of ammunition crates. The sky is a deep blue, and we are frying in 100-degree plus temperatures. We are near the Tactical Operational Center (TOC) close to the border.

All of a sudden, an airman runs out of the TOC and whispers in the ear of another airman attending Mass. Then both dash away.

As Mass continues, we hear the revving of Apache helicopter engines, which are now swarming in the air, waiting their turn to land and fuel up. Soon, they are in the air and disappear in formation beyond the 8,000-foot high mountains.

My Chaplain Assistant, Staff Sergeant Robert [last name], leaves Mass and then returns. He whispers in my ear that our soldiers are engaging the enemy — the al-Qaida and Taliban — who have crossed the mountainous Pakistani border to ambush our patrol. I ask our soldiers attending Mass to pray for their comrades.

When Mass ends, I am whisked off by helicopter to Salerno, which is a nearby Forward Operating Base (FOB) that has a Field Surgical Team hospital (FST). We are anticipating casualties from the battle.

We race over, only to discover that two severely wounded soldiers have died, just as the helicopter landed. I immediately administer the Last Rites — both soldiers were Catholic. Then I pray for the medics and the pilots who had made such a heroic effort to save these soldiers' lives.

Never Forget
I will never forget these and similar experiences during my deployment in Afghanistan. My priesthood deepened in profound ways. It didn't become easier to minister to the wounded, the dying, and their buddies. What happened instead is that I was brought to new levels of awareness of the mystery of suffering and death. I recognized how precious and short life is. I became more focused on who we really are in the eyes of God. It became crystal clear that our lives are framed — defined — by the love and mercy of God, for each of us and for the whole world.

I saw the impact of the Sacraments in the lives of our soldiers. I saw how they were transformed by grace, and this nourished my priesthood. I saw their trust in God and in each other — their willingness to choose sacrifice through selfless service.

Perhaps Specialist Elizabeth [last name] expresses best the sentiments of many of our soldiers when she says, "I feel saddened that so many people have died around the world in this war on terrorism. I am comforted and inspired, like so many others in my country, to have done my small part to remember those who have fallen."

She concludes, "It is good that people like myself do something beyond ourselves to give honor to those who have made the ultimate sacrifice for what we have as free Americans. It is consoling for me to know that if I happen to die [in Afghanistan], I will never be forgotten."

Please join me in remembering our fallen soldiers in prayer. May we as a nation never forget!

(This story garnered "First Place for Best Article" among religious order magazines in the 2005 Catholic Press Association Awards. It first appeared in the Fall 2004 edition of Marian Helper magazine.) Divine Mercy
Posted by Unknown at 9:12 AM

Good posts here for Veteran's Day, Ray. Thank you for YOUR service.

Thank you, Cathy of Alex!

My main responsibility when I was stationed in Europe was sampling the various beverages for hops content.

But if you check the history books during that period, you will notice that no wars broke out while I was doing my duty. Especially in Hungary.