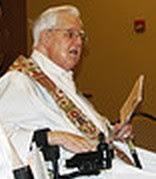 .
When Monsignor Patrick McDowell moved into an assisted-living apartment at Lakeshore in Duluth, he felt uncharacteristically shy about meeting the other residents. A Catholic priest since 1954, he had served several Duluth Diocese parishes and always had felt accepted, but at Lakeshore he didn’t even know who was Catholic.

One day another resident patted him on the shoulder and asked whether he had heard what had happened to the pope. “He has that bird disease,” the man told him. “He got it from one of his cardinals.” With that joke, and others that followed, McDowell soon felt at home.
“I began to realize I have some kind of mission here,” saidMcDowell, 79.

Shortly after he moved to Lakeshore in August 2006, McDowell offered to celebrate Mass. Now he does it five days a week. At a time of life that for many is marked by loss of loved ones or physical abilities, McDowell has found joy in serving a new flock.

“If I’ve ever experienced Christianity, I’ve experienced it here in the greatest sense of the word. The spirit here is tremendous,” he said.“… Everyone is accepted.”

McDowell, known to many as Father Pat, always has been a people’s priest.

He helped many low-income people — often 40 to 50 a day — who came to his rectory in Duluth’s Central Hillside neighborhood looking for assistance to buy necessities. The money came from a Helping Hands fund that was made up mostly of money McDowell received for performing weddings and funerals. He typically gave out more than $2,000 worth of vouchers a month for food, gas and medicine co-payments.

“Everything that came in went out. It was for the people,” McDowell said. McDowell considered Helping Hands a ministry because he often counseled the people who came to him. He occasionally runs into them and says it’s gratifying to see the impact a little help made in their lives.

McDowell retired as a priest in 2000, but continued to help Center City Parishes as a senior associate until a year ago. At that time he turned over the Helping Hands fund to the Gabriel Project of Churches United in Ministry.

In the summer of 2006, McDowell had trouble with falling and realized it was time to move into an assisted-living apartment. He checked out several before deciding on Lakeshore. Accustomed to living modestly, he said at first he felt guilty living in such a lovely place. His pension as a priest, Social Security payments, savings and an occasional check he receives from portraying a priest in the movie “North Country” pay for his one-bedroom apartment.

Saturday’s Mass draws about 50 to 70 people, while about 30 attend on Friday and about 15 on other days, McDowell said. People come from Lakeshore’s assisted-living, memory care, independent living apartments and short-term rehabilitation center as well as the neighborhood. “I’ve got a community here,” McDowell said. “Now I know why I was brought here.”

On a recent Thursday, McDowell sat in his electric wheelchair behind the altar as people took their seats in the chapel. He carefully rose and steadied himself behind the altar, then led 11 people through the familiar words of the Mass.[....Snip]

As McDowell sat contentedly in a recliner in his living room, he talked about how blessed he feels with friends, family and meaningful work.
“I really find myself very fulfilled,” he said. “This was God’s plan, not mine.”

Although he has health problems, he adapts to them.

McDowell recalled the Bible story of the 10 lepers that Jesus healed and how only one thanked Jesus. He said he used to be guilty of being one of the nine who didn’t give thanks. Now, he said, he thanks the Lord for many things, such as being able to get dressed on his own and not fall.

“God’s been very, very, very good,” he said. “My faith has increased 100 percent since I came here.”