North Dakotans seek salvation for churches; and Minnesotans, both rural and urban do also. 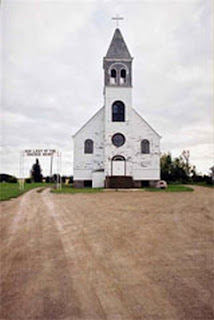 Our Lady of the Sacred Heart

Ten of North Dakota's churches close every year. Congregations die or move away. There's no money for new roofs or furnaces. Towns that encircle them are shrinking or gone, leaving steeples standing alone on the prairie.

Some of the churches are plain. Others have unusual architecture, wood carvings or rare stained glass. All of them store generations of memories. Many were built by settlers more than a century ago.

North Dakota has more churches — operating, abandoned or used for other purposes — per capita than any other state. There are 2,300 in all, more than three-fourths of them in rural areas. North Dakotans are trying to save the irreplaceable icons with grants from Preservation North Dakota, a non-profit group, and from residents' labor and fundraising.

"Churches were the glue that held rural communities together," says Dale Bentley, Preservation North Dakota's executive director. "In some ways, they're the most important buildings in the state."

Preserving or shutting down parishes is not something that is confined to sparsely populated regions or large eastern cities that are losing population. Many of the Twin Cities and first ring suburban parishes were constructed right after World War II when the population was increasing rapidly and priests to staff parishes were plentiful. That is no longer the case.

It won't be long, I would imagine, until the Archdiocese will be obliged to shut down some of the parishes in St. Paul and Minneapolis. People will be very upset. But if the funds, the people and the priests aren't available to provide for them, what is there for Church to do?