Day of Mourning in Minneapolis: Not on Top 11 List of Bicycle-Friendly Cities 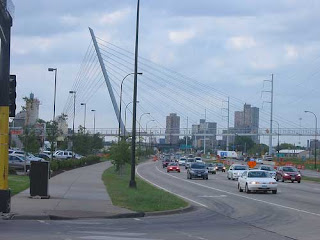 .
The City of Minneapolis, my home town, ruled by 13 , errrr. councillors, and a virtually powerless "weak-mayor", declared a day of mourning today when Wired Magazine came out with a list of the 11 most "Bicycle-Friendly" cities in the world and our name did not appear on it. Especially mortifying when our councillors all year long had been touting the fact that somebody else, who probably likes to ski, skate and snowmobile, had tagged us as the second most bike-friendly city in the U.S.

Even more to their chagrin, this devastating news from the bible of new technology came right after the dedication of the brand spanking new $5,000,000, designed to win architecture awards, four-lane bicycle bridge across the six lanes of Hiawatha Avenue at 26th Street that requires law observant bikers to go only a half mile or so out of their way to cross the road and return to the "Greenway." Those that don't feel like the extra effort (why are they riding bikes then anyway if not for more exercise?) will observe the traffic signals at 28th street and make the 150 foot crossing when all the cars are stopped. Or, in the time-honored practice of most bicyclists, just cross against the light if they think it is safe.

The application for funds for the next bicycle bridge, across the Mississippi River to connect with our neighbor, St Paul, a couple of miles further eastward, is still pending. That bridge will be located just a bit north of the new Lake-Marshall Street bridge that has sidewalks and designated bike lanes.

This is the City that just spent over $100 million for a new downtown library with no parking, designed by an "A-list" architect (who stole the money by designing something that looks just like the library built in the 1950's) And now the City figured out that they can't afford to operate it, so they turned the entire city library system over to the county government, after ensuring that the employees would continue to get paid more than county librarians.

Good going, City Councillors! Say, how's the banning of circus animals coming? And thanks for the "free" Wi-Fi that you set up for the city. I got a proposal for only $30 a month in the mail the other day. What did the city's portion of the cost go for? I already pay much less than that for DSL.

Oh, in case you need to get to a bike friendly community, here is the list of Wired's Top Eleven:

Minneapolis sucks - it is the worst City Council ever. You brought up several great points - I think we should over-throw them all. I got my "free-wifi" offer too - what a bunch of BS. (Sorry, I can't be as vulgar as Adoro! LOL!)