New Auxiliary For Milwaukee; First One in 36 Years! 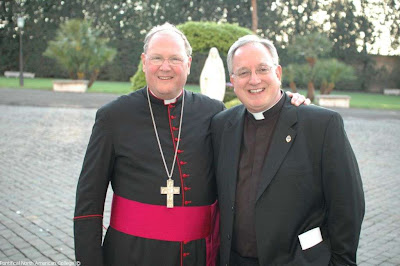 The NACers have converged to honor Callahan, 57 (above right, with Dolan), their spiritual director before the October move that returned him to the 675,000-member Beer City church, where he served two stints at its famed Basilica of St Josaphat and led the monumental structure's restoration. Archbishop John Myers of Newark and longtime Milwaukee Auxiliary Bishop Richard Sklba will serve as principal co-consecrators, leading a gang of 24 bishops before an over-capacity crowd in St John's Cathedral, where a Vespers service for the bishop-elect will be held tonight. 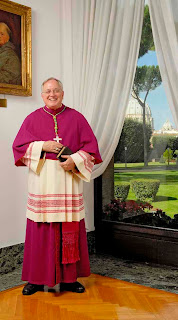 Milwaukee's Catholic Herald has rolled out a special section on the city's first new auxiliary since 1979... and the first in even longer to hit no speedbumps on the road to Ordination Day:

Conventual Franciscan Fr. Robert Joseph Switanowski, a friend of the bishop's for 27 years, witnessed many acts of kindness by Bishop Callahan, especially when they lived together in community.

"No one left us not getting what they wanted," said Fr. Switanowski. "If it was an immigrant needing money for a lawyer, he found the money. If someone with a family lost his job and couldn't get Christmas presents, he found the money. He sat up all night with a family when there was a death of a baby. He would cook for the poor. If we were eating something and someone knocked on the door for food, they got it."

Fr. Switanowski, along with many of Bishop Callahan's friends and fellow priests, have looked to the new bishop as someone they strive to emulate.

"He is the example of what I want to be as a priest," said Fr. Switanowski, who met the bishop when Bishop Callahan was the vocations director for the St. Bonaventure Province of Conventual Franciscans in Chicago when Fr. Switanowski was considering joining.

"No one loves the priesthood more than he does. In my view, a lot of us love the priesthood, it makes us make sense of our lives, but I wanted to be a priest early on because of the way I saw him live his priesthood. He observes the rule and constitution in contemporary ways; he doesn't look like he's suffering and he certainly enjoys a good glass of scotch."

Frank Wolski was born on the same day and the same year - June 17, 1950 - as the future Bishop Callahan. The two became friends in first grade at St. Mary of Perpetual Help in Chicago. It was Wolski who is credited with introducing Bishop Callahan to the idea of becoming a Franciscan.

"I talked to Bill in eighth grade about where I was going to high school, and I introduced him to my uncle, who signed him up at Crystal Lake," said Wolski. Franciscan Fr. Pascal Wolski, Frank's uncle, was then the vocations director at St. Mary Minor Seminary.

Wolski, who is planning to attend the Dec. 21 ordination, said that from Bishop Callahan, he learned "a good example of how you want to be as a person. The way he carried himself, the way he conducted himself, you could see that he was doing all the right things. He was someone that you'd look at and say, 'That's the way I want to lead my life, too.'"

Moldovan, a friend since early teenage years, said he learned a lot from his classmate.

"One of the things he taught me was that he really wanted to be a priest," said Moldovan. "He really had the vocation to be called and he looked at it in a bit more organic way than I did. When I was a kid I knew I was going to be a priest, which did not end up happening. Bill had to work at it. He chose it. He took some time off and then decided to proceed. It was a much more two-way process, it was a calling from the Lord, but in his case he really had to act on it. And because he had that warmer side, that sense of hospitality, he openly embraced it and worked at it and, maybe in the long run, really wanted it much more than some of us that presumed we'd just ride on through."...

Karen Abbott first met Bishop Callahan 30 years ago when he was in Toronto studying at St. Michael's College at the University of Toronto. She recalls him saying his life-long ambition was to be either a priest or a taxi driver in Chicago. Though the taxi driver profession never panned out, she has attended his ordination, first Mass, silver jubilee, and now will attend his ordination as bishop. When she informed Bishop Callahan that she would be attending the Dec. 21 ordination, he replied, "You were there at the beginning."

In fact, Abbott said she distinctly remembers driving with him after his ordination.

"His first remark after getting into the car was, 'I'm finally a P.O.G.'" she recalled him saying. "We have referred to him as that ever since. Priest of God. I guess now we'll have to call him a B.O.G. - Bishop of God."

"Most of my religious life has found me in a hospital suffering either from problems with my legs or problems with my heart," he said. "And I remember one particular time in the emergency room and I coded and they didn't know if they could bring me back, and Bill didn't leave my side. The doctor said, 'You can go now, Father.' And he didn't leave. Every time I opened my eyes, he was there. He ran the parish, said the Mass, and was always at my side. We Franciscans stress brotherhood; it's what we profess. He's all that and more."...

"He wasn't given a reward because he made a few bucks for the basilica," he continued. "He was asked to be a bishop because of the kind of priest he is. The Holy Father certainly heard. I used to work in Rome and Bill's work is well known in the city of Rome and by other bishops."

Fr. Switanowski said he remembers a parishioner's reaction upon hearing Bishop Callahan was named a bishop.

After getting past the head-cold he's called his "parting gift" from Rome and a brief adjustment period, the new auxiliary will find himself "full-time in administration," says Dolan, on top of all the confirmations and other pastoral duties.

With the archbishop taking on a growing roster of national commitments, getting his "first choice" back home couldn't be more of an early Christmas gift. Rocco, Whispers in the Loggia
Posted by Unknown at 9:47 PM