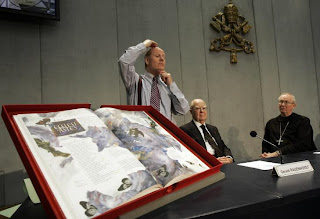 World-renowned calligrapher Donald Jackson, left, Gerald Rauenhorst,
center, of the Rauenhorst Foundation,
and Abbot John Klassen, of St. John's Abbey, with the "Wisdom Books. "
Pope Benedict XVI was presented today with one of the limited editions of the St. John's Bible, the first-known handwritten Bible commissioned by a Benedictine monastery since the invention of the printing press over 500 years ago.

The "Wisdom Books," a limited edition reproduction of one of the Old Testament volumes of the 1,150 page-Bible — measuring 2 feet tall and 3 feet wide when open — was presented to the pope during a private audience. He will receive the remaining six volumes over the next four years.

"The pope's eyes lit up with joy and enthusiasm as he turned the pages," Cardinal Theodore McCormick, retired archbishop of Washington, D.C., told reporters after attending the presentation.

The Bible's British artist, Donald Jackson, once scribe to Queen Elizabeth II, was also present at the audience.

Over the past 10 years, he and a team of calligraphy experts painstakingly painted every page on parchment, using goose feather quills, ancient inks and precious metals to illustrate the original handwritten text.

"When the pope remarked that this Bible was 'a work for eternity,' he expressed what I feel a lot of the time," the artist said. Jackson said it would take another 22 months to complete the last two volumes of the seven-volume Bible.

The $4 million project, funded by private donations, was commissioned by St. John's Abbey in Collegeville, Minn., one of the largest Benedictine monasteries in the world. The Benedictines, whose order was founded in Italy by St. Benedict around 530, have a long tradition of manuscript sharing and preservation.

The original manuscript of the new Bible is stored in special cases in a vault in the neighboring St. John's University run by the order.

If the methods used to illustrate St. John's Bible are age old, the imagery is updated with such modern touches as views of Earth taken from outer-space for the Creation in the Old Testament, and an image of the Twin Towers to illustrate forgiveness in the Gospel parable of the Prodigal Son.

The New Revised Standard Version of the Bible, a modern English translation, is the version being used for the text. Its language is gender inclusive when referring to men and women.

While the more elaborate reproductions of the new Bible can cost over $100,000, pocket editions are already available at $70 a volume. Star Tribune 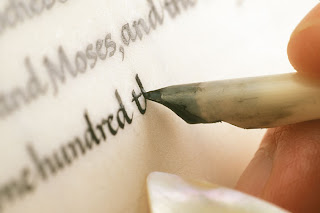 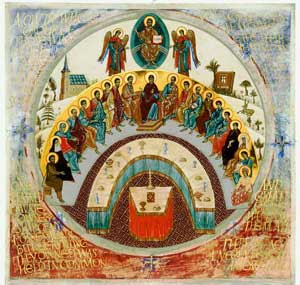 They're calling it a pocket edition? It's the biggest text on my shelf! :)

I was privaleged to be able to go to St. John's years ago when they first started and watch them at work. It's a beautiful volume.

I think it's great that they gave the Holy Father one of the few copies as a sign of respect to him.

I would have loved to have watched them actually work. Most of the work was done in Wales, but I'm sure they must have had demonstrations in Collegeville.

I find this project to be one of the most interesting things that have been done in my lifetime. And no electronics or machinery or computer assistance.

Well, they did use computers to lay out the pages so they could fit the original artwork around the text of the Bible, ending up with page and book breaks that made sense.

I wonder if they are going to sell used quills or ink pots when they are done. That might be fun to have as a memento if you can't afford a signed print of a page or a capital letter.