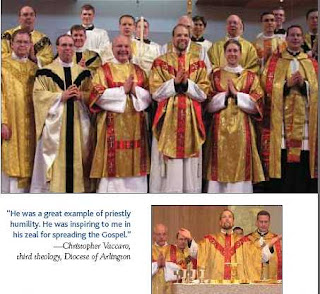 When God chooses a man to be priest, he also marks out an allotted time of earthly ministry. For Fr. Darin Didier, ’S05, this span was less than 100 days. Ordained on June 22, 2005, Fr. Didier passed away in Fargo, North Dakota, on September 6, after a long struggle with cancer, at the age of 32.

“His passing came as a shock because the end really happened so quickly. For his cancer to progress so rapidly was a surprise,” said Fr. Terry Dodge, a classmate and fellow Fargo ordinand. “What was inspiring was that even though he was sick he still threw himself fully into his work. The Saturday before his death he was celebrating Mass in his parish and he had to stop midway through his homily and go sit down because he was so weak. That’s how much he wanted to give himself to do the Lord’s work.”

A native of St. Paul, Minnesota, Fr. Didier studied at the University of North Dakota and received a master’s degree in physical therapy in 1997. He was accepted as a seminarian for the Diocese of Fargo, North Dakota, and came to Mount St. Mary’s in 2000. His studies were interrupted by the onset of non-Hodgkins lymphoma cancer, which forced him to miss the spring 2004 semester. With strong faith and perseverance, Fr. Didier underwent treatment, fulfilled the necessary academic requirements and ultimately was called to Holy Orders.

At the Mount, he was president of the Legion of Mary and served as a chaplain for the university track and field team.

The seminary community celebrated a Memorial Mass for Fr. Didier in Immaculate Conception Chapel on September 12.

Fr. Peter Ryan S.J., seminary professor of moral theology, was one of the Mount’s representatives to attend the Requiem Mass in Fargo. “It was the most beautiful funeral I had ever been to,” he recounted. “Fr. Didier’s parents have a really strong faith. His father walked out of the church giving the victory sign.”