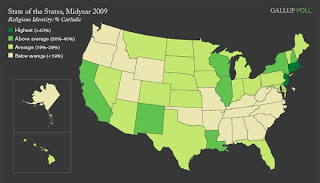 . . . About 24% of all American adults identified as Catholic between January and June of this year. The distribution of Catholics across the states is heavily skewed toward the New England and Mid-Atlantic states, the regions of the country through which the large waves of Catholic immigrants from Europe arrived in the 19th and 20th centuries.

The state with highest percentage Catholic is Rhode Island, at 53%, followed by Massachusetts, Connecticut, New Jersey, and New York. Two Midwestern states, Wisconsin and Illinois, are also in the top 10 states in terms of the percentage Catholic. States with higher percentages of Hispanic residents, including California and New Mexico, are above average in the proportion of their residents who are Catholic. Louisiana, home to immigrating French Canadians (Cajuns) several centuries ago, also has an above-average Catholic population.

The 10 states with the lowest percentages of Catholics are all in or close to the South, with the exception of Utah (with its high concentration of Mormons). Mississippi, with a 6% Catholic population, has the lowest proportion of Catholics of any state . . . .

Gallup Poll (Click for information on Protestants, Jews, Mormons and "None")