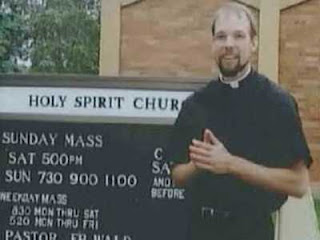 Darin Didier decided to become a priest while he was learning to be a physical therapist. He was a priest for only three months before he died. Now, rumor has it that miracles are performed for those who pray at his gravesite.

For the past few years people from across the country have made the trip to a small western Minnesota cemetery. Most have never met the man they are there to talk to.

Darin Didier was priest for just three months. He died three weeks before his 33rd birthday.

His parents, Len and Bonnie Didier, said growing up their son was a little shy. He was every bit the athlete in Alexandria and was a track and cross-country star through college. He went to the University of North Dakota to be a physical therapist.

Before he started his last year at UND, he changed his mind about being a physical therapist. He wanted to be a Catholic priest.

Darin started seminary and a few years later he was at home for a visit.

"He was just walking around here and I noticed a spot on the back of his neck. I just thought it looked a little different," Bonnie explained.

In 2003, Darin was diagnosed with Non-Hodgkin Lymphoma. He went through chemotherapy, radiation and a stem-cell transplant.

"Everything that they did for him his cancer rebelled and came back worse," said Len.

"He was very accepting. I think that made it easier because if I was down he would actually lift me up. I have to remember that," said Bonnie.

His parents had him buried in the back of St. Mary's Cemetery. It's a small area on the west side of Alexandria. They were not prepared for what happened next.

Darin's parents started to see cars pulled over and people mulling around the grave. They would leave little trinkets by his gravesite. People were coming to ask for Darin to intercede on their behalf for healing.

In three years, hundreds of people have stopped by, including a whole bus full of kids just a few weeks ago.

Now, they have a little black book where people can write out their prayers. They also have a place for people to put small tokens they may want to leave behind like coins and rosaries.

"I think it's been by word of mouth that people have had different experiences and they want to share it with others," said Bonnie.

The first thing Darin's father noticed on the grave was a picture of a sonogram taped to the side of it.

That picture belonged to John and Maggie Mauch.

They were expecting their third child and they found out quickly that something was wrong. Doctors told them their little girl had a hole in her back and would be born with spina bifida. They said there was still time to end the pregnancy.

John's parents had heard about the grave a few hours away.

"We just kind of looked at each other and went, 'He says we should go,'" said Maggie.

In the summer of 2006 the entire Mauch family made the trip.

"I asked for peace to be with us and the complications she had to be just less than what they thought it was going to be," Maggie recalled.

Their daughter, Macy, went home from the hospital just a week after she was born. Her doctors were amazed at all she can do considering how high on her back her injury is.

The Mauch's don't think too much about that day at the grave. But they do think about how much of a miracle little Macy is.

"The reason why we did it is, 'What's it going to hurt?'" said Maggie.

"I feel very humble that our son is still touching a lot of people's lives," Bonnie said.

Touching more lives in his death than his parents believe he ever possibly could in his life.

"I guess what I learned from my son if I were to sum it up, is life is a matter of surrender. Surrender doesn't mean to give up, it means to do the best you can and leave the results to a higher power," Len said.

Every year there is a memorial Mass held in Father Darin's honor. This year, it's on Labor Day, Sept. 7 at The Church of St. Mary in Alexandria. WCCO-TV HatTip to Abbey Roads
Posted by Unknown at 4:33 AM

My mom asked me to write and say thank you for the prayers. She was at the gravesite and traveling back to Illinois. Her empazema is better the doctors say and she would like Len to call her as she believes the prayers have helped her. Her number is 309-495-0775. her name is Shirley. Len you were at the gravesite and prayed for you thank you. she would love to hear from you. Also the lady that was with you was reporter and has contacted mom. She plans to do the documentory. Thanks cyndi