Confession: Go to where the people are 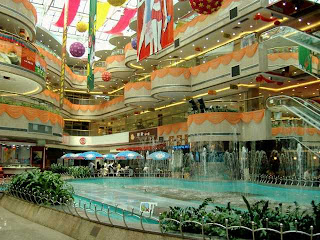 .
Statistics show decreasing numbers of Catholics going to confession, but rather than discouraging churches those numbers are only encouraging them to be more creative in their outreach.

A 2008 study conducted by the Center for Applied Research in the Apostolate at Georgetown University in Washington revealed three-quarters of Catholics reported they never participate in the sacrament of reconciliation or they do so less than once a year.

The Diocese of Colorado Springs, Colo., has taken an innovative approach to remedy this: Go to where the people are -- the shopping mall.

Located on the upper level of the Citadel Mall in Colorado Springs, between the Burlington Coat Factory and Dillard's department stores, the Catholic Center, which offers Mass and the sacrament of reconciliation, is a place shoppers can find solace away from crowds.

"Some people are hesitant to stop into an organized church, but the Catholic Center offers a 'no strings attached' approach," Msgr. Robert E. Jaeger, vicar general of the diocese, told Catholic News Service in a telephone interview.

"The Capuchins wanted to make contact with those who have fallen away from the church. Visitors to the center are anonymous and can either stop in regularly or just once," he said. "People can say, 'Well, I've finished my shopping. I think I'll stop inside for a moment for myself.'"

Staffed by five Capuchin Franciscans, the Catholic Center at the mall is financially supported and promoted by the Diocese of Colorado Springs, the Capuchin Province of Mid-America and the Knights of Columbus.

The center operates during mall hours, providing information on Catholic charities and parishes. It also houses a Catholic bookstore and a chapel where Mass is celebrated twice a day and confessions are heard from 10 a.m. until 9 p.m.

Many parishes offer confession at specific times. With busy schedules, parishioners may miss that window. But in Illinois, with "24 Hours of Grace," in which participating parishes are open for a full day and priests hear confessions on a rotating schedule for the 24 hours, time is no longer a valid excuse.

"I've been a priest for 15 years and know about the declining percentage of people attending confession in the last 30 years or so," Father Michael McGovern, pastor of the Church of St. Mary in Lake Forest, Ill., told CNS.

From the mind of Father McGovern sprang an idea seen as so ingenious that the Archdiocese of Chicago wanted to be a part of it -- "24 Hours of Grace."

The archdiocese adopted the idea as part of its outreach. It is usually held before the Lenten season, a time when many make the resolution to start anew.

"It is a bit of a gimmick, but if people think 'If priests can take time out and hear confessions for 24 hours, then why can't I attend the sacrament,' then I think we've done our job," he told CNS. "What a better way to come back to the church and the sacraments after you've gone to confession."

"24 Hours of Grace" has existed for three years and Father McGovern's parish has participated each year.

"We have a collaboration among the priests," he told CNS. "It takes at least 13 priests to put this event together. We come from different parishes and we all work together."

Knights of Columbus also are involved in the event; they provide security for the priests and participants throughout the day and night.

Father McGovern told CNS, "A positive sign of success despite these statistics has been the number of people I've seen coming back to the church after an absence of 10, 15 and 30 years." National Catholic Reporter