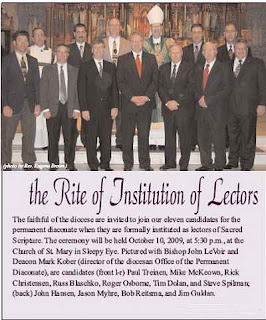 "Click"
.
Eleven area men, including a Mankatoan, are working toward ordinations as permanent deacons for the Catholic Diocese of New Ulm. The process, a first for the diocese, will include their installment as lectors in a 5:30 p.m. ceremony today [Saturday] at the Church of St. Mary in Sleepy Eye.

Deacons are lay people who perform many of the same duties as priests. [Deacons are ordained ministers]!

[The Second Vatican Council lists the deacon's liturgical and pastoral functions: "to administer Baptism solemnly to reserve and distribute the Eucharist, to assist at and bless marriages in the name of the Church, to take Viaticum to the dying, to read Sacred Scripture to the faithful, to administer sacramentals, and to preside at funeral services and burials"]

The 11 candidates are in the third year of a five-year discernment and formation process. Their ordinations would be in 2012.

“We’re very proud of these people. It’s a lot of commitment and a lot of time that they’ll put in,” said Kober, director of the diocese’s diaconate program.

Among the candidates is Russ Blaschko of the Church of the Holy Rosary in North Mankato. Blaschko, who has two sons contemplating the priesthood at a St. Paul seminary on the University of St. Thomas campus, said his decision to become a deacon was spurred by a growing strength in his faith. “I’m just going down life’s path, and things happen to me,” said the Mankato banker.

Kober said the lack of a Catholic university in the New Ulm diocese has been a key reason why the diocese didn’t pursue diaconate programs in the past. He said the 11 candidates will be trained by visiting staff from an Indiana seminary.

Other Mankato-area candidates include Rick Christensen, Steve Spilman and Jim Guldan, all of New Ulm; Roger Osborne of Winthrop; and Tim Dolan of Gaylord.

The ordination of these men as deacons in 2012 will be a tremendous boon to the Diocese of New Ulm, one of the most rural dioceses in the country and one that suffers greatly from the shortage of priets.

This is what Deacon Kober really said:

On October 10, 2009, eleven candidates for the permanent diaconate will be instituted by Bishop John M. LeVoir as lectors of the Church. The ceremony will be held at 5:30 p.m. at the Church of St. Mary in Sleepy Eye. One year ago, the eleven men were admitted as candidates for the order of deacon in a similar ceremony.

During the five-year formation process adopted by the Diocese of New Ulm to prepare men to be permanent deacons, there are several steps. In the first year, called aspirancy, the man and the Church discern whether or not there is truly
a call to formation. It officially ends with the aspirants’ evaluation and the bishop's decision to accept or reject them as “candidates” for the diaconate. After successfully completing the first year of academic training, candidates are
instituted as “lectors.” They may read the lessons from Sacred Scripture, except for the Gospel, in the Mass and other sacred celebrations.

After two years of formation, the men are instituted as "acolytes." It will then be their responsibility to assist priests and deacons in carrying out their ministry, and as special ministers to give Holy Communion to the faithful at the liturgy and to
the sick.

When the period of discernment and formation is completed, the candidates are ordained to the permanent diaconate. The ordination ceremony is tentatively scheduled for April 2012.

Similar steps are taken in the formation of candidates for priesthood. However, a man in formation to become a priest is
ordained a “transitional” deacon rather than a “permanent” deacon. In other words, he transitions to the priesthood. Ordination to the permanent diaconate results in just that, a permanent deacon.

It is important to note that all of this occurs at the discretion of the bishop. Each step along the way, the bishop is the ultimate decision maker for the Church. He is also the one who decides how deacons will serve the Church.

Bishops have a special relationship with deacons because it is for bishops that deacons are particularly ordained. Other than the deacon, only the bishop is authorized to wear the dalmatic, a vestment worn by the deacon at Mass. This custom
symbolizes the relationship between a bishop and his deacons. The deacon is assigned his duties directly by the bishop and he serves the people of God under the bishop’s authority. While deacons sometimes have diocesan roles, bishops
generally assign deacons to a particular parish and assign them under the supervision of the parish pastor.

Deacons also have a special relationship with priests. After Vatican II, early on in the renewal of the permanent diaconate, some felt that deacons represented a “threat” to the priesthood. The opposite is true. The two ministries, that of priest and that of deacon, compliment one another. The Prairie Catholic

Tip O' the Hat to Bill

Wow! A few errors in this article. I seriously doubt Deacon Kober said that deacons can anoint the sick.

There is a good article on the program in the Prarie Catholic.