Looking for an Intercessor on All Saint' Day? How 'bout Minnesotan, Father Darin Didier? 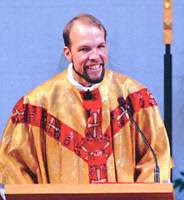 He listens to those in need. He is there when people want to cry on his shoulder. He loves unconditionally. He gives hope to people in despair. Some think he helps heal the sick. And he does it all from his grave.

Even in death, Darin Didier continues to touch people’s lives.

Bonnie and Len Didier of Alexandria describe their son as a caring, loving boy and man who was always reaching out to people. Len could spend hours telling poignant stories of how his son made a difference and changed people’s lives for the better.

Darin reached out to people with drug and alcohol problems. He prevented two people from committing suicide. He helped people through rough times.

From his grave at St. Mary’s Cemetery in Alexandria, those stories of healing and hope continue, and to some, are nothing short of miraculous.

Darin grew up in Alexandria and graduated from Jefferson High School in 1991. An avid runner, he was pursuing an education in physical therapy when someone put a slight twist in his plans.

Darin, who was raised Catholic, had one more year of school left when he took a trip to Phoenix with a friend. While there, they visited with a priest who Darin knew. That visit changed his mind about what he wanted to do with his life.

He wanted to be a priest.

“Darin came back and said that Father Luke could read his soul,” Len recalled. “He wanted to quit school and become a priest.”

With only one more year of physical therapy school left, his parents convinced him that he should finish what he started.

After he completed that year and earned his degree, Darin attended a minor seminary school for one year. Having spent several years in college, he needed a break from school for awhile, so he worked as a physical therapist for two years.

In the fall of 2000, Darin answered the call when he began a five-year education at Mount St. Mary’s Seminary in Maryland. Things went well until a visit home in May 2003, when Bonnie noticed a strange mole on her son’s neck.

“I noticed it and thought he really needed to get it checked,” Bonnie said. “Something inside me told me I should be worried about it.”

A biopsy revealed it was cancerous and he was diagnosed with non-Hodgkin’s lymphoma. Within a week, Darin was receiving chemotherapy treatments, which lasted throughout the summer.

He returned to seminary school that fall and continued with chemotherapy and total body radiation. But the cancer was persistent, and with each treatment, it came back. As a “last resort,” Darin had a stem cell transplant in March 2004.

“It didn’t work at all,” Len said. “Everything they did, his cancer came back worse. It’s like it got angry.”

But the Didiers never gave up hope.

“I was always thinking a miracle would happen,” Bonnie said. “Miracles happen every day.”

Accepting his illness with the knowledge that he had just as important a job to do in heaven as on Earth, Darin continued his education at the seminary, not letting on how sick he really was. Suspecting that he may not live long enough to become a priest, in May 2004 he was ordained a deacon.

Despite the persistent cancer and some intense holistic treatments, Darin made it through his last year of seminary. On June 4, 2005, his dream came true. He was ordained a priest and was assigned to Holy Spirit Catholic Church in Fargo, North Dakota.

“Three is a magical number – the Trinity,” Len said of what he surmised was a sign from God of what was to come.

Darin was buried at St. Mary’s Cemetery. The following summer, when the Didiers visited their son’s grave, they found trinkets left there – medals, coins, rosaries, toys and other items.

“There were things there all the time,” Bonnie said.

During one visit in the summer of 2006, Bonnie and Len found a sonogram taped to the grave. They discovered it had been left by a couple whose unborn child had severe spina bifida and a hole in her back.

This couple had heard rumors that people were visiting Darin’s grave to ask him to intercede on their behalf for healing.

They figured an intercession to God couldn’t hurt.

A few months later, their baby girl was born with complications far less severe than had been diagnosed. The baby went home just a week after her birth and doctors were amazed at how much she was already able to do.

As time went on, the Didiers heard more of these stories in which prayers were answered after a visit to their son’s grave.

One woman afflicted with sudden onset palsy visited the grave and while she was there praying, had a severe attack. After it was over she said, “I’m healed.” The next week, her doctor found no sign of the disease.

A friend of Darin’s had been diagnosed with thyroid cancer. At every medical appointment following a prayer session at his grave, his results kept improving. He is now cancer-free.

One man with prostate cancer prayed at Darin’s grave prior to an operation, which turned out well. He continues to visit the grave before each check-up, and has improved at each one.

The parents of a 2-year-old boy had struggled for months to find out what was wrong with their son. They prayed at Darin’s grave. A short time later, a stranger approached them at a restaurant, and just from looking at the toddler, knew exactly what he had, as she had a family member with the same extremely rare disease. Because the boy was doing much better than expected, he was sent to the International Institute of Health in Washington, D.C. Through him, they found a way to diagnose the disease more quickly, and may have found a link to autism.

The good news spread quickly, and more people visited Darin’s grave – in hopes of healing, to pay their respects, or just to pray. And more visitors left tokens or wrote down their thoughts and left them at the grave.

To accommodate these trinkets and writings, the Didiers installed a pillar with a removable cover next to Darin’s grave. In the pillar, they left a “guestbook” that people can sign or write down their prayer requests.

“Hundreds of people have visited the grave,” Bonnie said, pointing out the entries in the notebook.

“It’s humbling, very humbling,” Len said. “People have no problem believing that in his [Darin’s] goodness, the Lord would listen to them.”

Despite the countless “unexplainable” accounts they continue to hear, the Didiers know that it isn’t Darin who is working these miracles.

“As Christians, we are told if we have faith, we will, in His name, work miracles greater than the impossible,” Len concluded. “Darin surrendered totally to the Lord. Surrender means doing the best you can and leaving the results to a higher power. He allowed the Lord to use him as He saw fit.”

“He is just doing God’s will,” Bonnie agreed. “Darin is not doing the miracles. He is just a link.

“He is the intercessor.” Echo Press, Alexandria