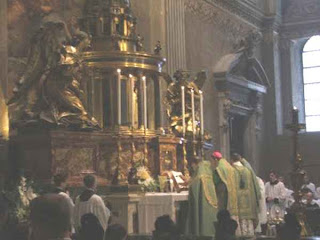 The group Giovani e Tradizione have been holding their "Summorum Pontificum" conference at Rome. The conference was mentioned in the greetings by the Holy Father after today's Angelus. Today, Archbishop Raymond Burke, Prefect of the Apostolic Segnatura [the Vatican's "Supreme Court"], said the first Solemn High usus antuquior Mass in the Basilica of St Peter's for 40 years, in the chapel of the Blessed Sacrament. [Archbishop Burke, the former Bishop of La Crosse, and Archbishop of St. Louis, probably will be made a cardinal at the next papal consistory. He has also been named by the Pope as a member of the Vatican's Congregation for Bishops. Surely this will give him more input into the selection of U.S. bishops in the future.]

The Mass was attended by Bishop Schneider (author of "Dominus Est"); Mgr Pozzo (Secretary of Ecclesia Dei) and over a hundred priests were present. There are more photos (including the above one) at the Messa in Latino blog.

You can read Robert Moynihan's narrative of how he got the news of the Mass. There are also lots of photos at JP Sonnen's Orbis Catholicus blog. Here is a short video of part of the Mass from Gloria TV:

The post at Messa in Latino tells the tale of petty obstruction that will be all too familiar to anyone who has spent time in Rome. First of all, the day before the Mass, the time was changed to half an hour earlier. (Something similar happened at Lourdes with the time of the usus antiquior Mass there.) Then, on arrival at the Basilica, people who asked about the Mass were told that there wasn't one - there was a Novus Ordo Mass at the Altar of the Chair. After insisting (English people find it difficult to insist in the right way to achieve results), they were grudgingly directed to the Blessed Sacrament Chapel. This was guarded by a dozen "Sampietrini" and Vatican Police and they were told that it was a private ceremony for a group. Again insisting (and being threatened with being kicked out), they managed to get nearer. The chapel, of course, was filled to overflowing.

This is all very typical of life in Rome and the Vatican - and by no means limited to matters surrounding traditional liturgy. If you live or work there, you gradually get used to it - not before several times wanting to pull your own head off in frustration. The consoling thing is that these high-profile Masses are obviously not going to stop any time soon, and the petty officials will, over time, be slapped down and given more specific orders. Hermeneutic of Continuity

Beautiful video, thank you for posting it Ray

Yes, quite momentous. Be interesting to see how much attention in will get in the Catholic press, especially the diocesan press--little or nothing that pertains to the traditional Latin Mass gets noticed in ours, the Catholic Herald, Diocese or Superior.