Wanna chat with a Cardinal about Church gossip? Here's your chance! 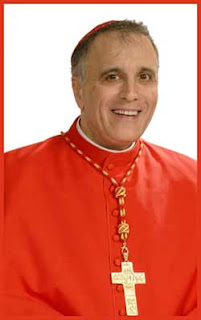 The 13th Annual Bishop’s Dinner for Catholic Education will feature Daniel Cardinal DiNardo, former bishop of Sioux City. The event will take place on October 11 at the Sioux City Convention Center. The Bishop’s Dinner supports more than 6,000 students who attend Catholic schools throughout the Diocese of Sioux City. [They seem to know all about him in Sioux City, but if any of you Gophers don't know of him, he is currently the Archbishop of Galveston-Houston, the newest Cardinalate in the United States.]

Cardinal DiNardo came to The Diocese of Sioux City from the Diocese of Pittsburgh in October 1997 when he was ordained Coadjutor Bishop. He became Bishop of Sioux City in November 1998 and served in that office until January 2003, when he was appointed Coadjutor Bishop (later Archbishop) of Galveston-Houston. In October 2007 he was notified by His Holiness Pope Benedict XVI of his elevation to the rank of Cardinal, the first from Texas and the southwestern United States. Cardinal DiNardo maintains his office as Archbishop of Galveston-Houston and also serves as one of the Pope’s principle collaborators and advisors, as well as a member of several congregations of the Holy See.

“I obviously have great affection for the diocese and for the Catholic schools in the Sioux City Diocese,” Cardinal DiNardo said. “They are a very important part of the formation of our young people.”

Bishop R. Walker Nickless said the diocese is extremely honored and privileged to have Cardinal DiNardo return to Sioux City for such an important event.

“His return to our city is always a joy, but especially for this event which does so much to benefit and promote diocesan Catholic schools,” he said. “When Cardinal DiNardo was bishop of our diocese, there was never any doubt about his total support of Catholic schools. I anticipate that his upcoming comments at the Bishop’s Dinner will reinforce his deep commitment to Catholic Education.”

Tickets are $125 per person with $80 of each ticket going to Catholic schools within the Sioux City Diocese. Last year, over $100,000 was distributed to Catholic schools because of the success of the Bishop’s Dinner. Tickets go on sale August 24. For more information or contact the Diocese of Sioux City at 712-255-7933.