Restoring a Treasure: The Cathedral of St. Joseph in Sioux Falls 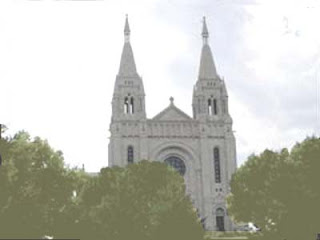 The Diocese of Sioux Falls in South Dakota is undertaking a $30 million restoration of its cathedral. Architect Duncan Stroik of the University of Notre Dame, who is renowned for his appreciation of classic forms of architecture, is overseeing the restoration, which is intended to bring to fruition the original design of Franco-American architect Emmanuel Louis Masqueray (1861-1917).

[Who wouldda thunk it? Another magnificent church designed and built by Masqueray, who built the Cathedral of St. Paul and the Basilica of St. Mary at about the same time. Few are probably aware that he also built the church of St. Louis King of France in downtown St. Paul, another architectural masterpiece.] Among the two dozen churches that he built, besides those listed above were:

One of the most prominent structures in the region is getting a multi-million dollar makeover.

Built in 1919, the St. Joseph Cathedral is a sacred and civic landmark. But it's been showing its age. So the decision was made to restore the Cathedral to its original splendor; a massive undertaking that will cost $30 million and two years to complete.

When architects designed the Cathedral, their vision extended beyond what the original builders were able to complete.

Now, the diocese is fulfilling their dream.

This past June, workers began gutting the Cathedral, removing all of its pews and other fixtures in order to remodel this sacred treasure.

For anyone who's ever been inside the Cathedral, seeing it like this under construction, is quite a drastic change, especially for the Bishop.

"It makes me very nervous, not so nervous now, we're now beyond most of the destruction so we are beginning to rebuild to restore and beautify this great treasure," Bishop said.

"There's this beautiful building which is 90 years old in need of repairs, just basic things to keep a building like this going, nothing had been done for over 35 years," Catholic Bishop Paul Swain said.

In fact, the Cathedral still had some of its original wiring, which is now being replaced along with many other fixtures.

"There'll be a marble floor, a new altar and a lot of other elements that have yet to come which will be next year, because it's going to take us another year and a half to get it all done," Bishop Swain said.

One of the most impressive sites here at the Cathedral during the construction phase are the scaffoldings. It took three semi loads and three weeks to set up.

Hundreds and hundreds of pipes connected together in order to reach 60 feet in the air, allowing skilled artists to freely paint the architectural designs on the ceiling without fear of falling.

"The artists who are doing the painting is the same company who did the painting back in the 30's and 40's are doing it now and have some of the old drawings, obviously very different because of computerization, but it's very labor intensive, it's not just painting, it's figuring out how does this all fit together in a way that highlights the beauty of the artwork," Bishop Swain said.

Crews are also in the process of picking the colors for tall columns, as well as the paint for the three dimensional figures of the Apostles, the Nativity scene above the altar and the Stations of Cross.

"They look at it they try things and then we say do we like this or not and try something else, it's really quite an amazing process," Bishop Swain said.

A process the Bishop hopes parishioners will appreciate when its complete.

"I hope there's several reactions, one is wow what a beautiful place that lifts the spirit and if it lifts the spirit perhaps brings a prayerful sense to people. Our hope is that we're not creating a beautiful place to come and look, but a place that can be nourishing to people spiritually and be a place of sacred music and concerts and those uplifting things," Bishop Swain said.

While the Cathedral is under construction, mass is being held in a gymnasium. But the annual "Christmas at the Cathedral" will still be performed this year inside the Cathedral from December 17-20. There's also been a Web site has been set up so you can follow the progress being made at the Cathedral. KELO-TV, Sioux Falls

See KELO videos of the restoration