St. Philip parishioners walk toward the Church of Ascension in Minneapolis following the last Mass at St. Philip June 5.

It was fitting that Father Dale Korogi presided at the last Mass to be celebrated in St. Philip Church in Minneapolis on June 5, after the parish officially merged June 1 with Ascen­sion Church, just eight blocks away.

The merger of the 250-household parish with Ascension’s 650 households was first announced by the archdiocese April 30.

In recent years, many members of the once tight-knit Polish community, however, have dispersed to other parishes, cities and states.

“I’ve learned in my 50-some years that every death has a new life,” Father Korogi said. Although the closing of the church ends an era of Catholic life on that corner, he added, “What was built there won’t go away.”

Since his arrival at St. Philip several years ago, Father Jules Omba Omalanga has ministered to a growing community of fellow immigrants from French-speaking African countries who traveled to St. Philip from across the Twin Cities.

Dick Picquet has attended Mass at St. Philip for about three years. In addition to serving on the parish’s financial committee and parish council, he also has been the custodian for the church building, he said.

“It’s a neat church with a neat background,” Picquet said. “But the financial sustainability wasn’t there . . . for about 10 years.” 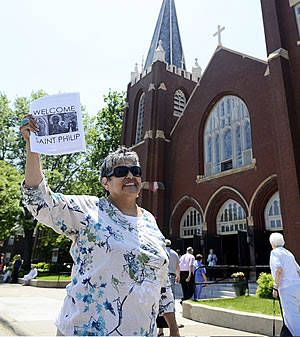 A parishioner from Ascension welcomes the St. Philip community June 5 as they arrive for a reception.

When the parish had a number of financial challenges earlier this year, parish leaders went to talk with the archdiocese, he said.

Father Peter Laird, archdiocesan vicar general, said St. Philip was not designated for structural change as part of the archdiocesan Strategic Plan announced last October, but soon after it came “on our radar screen as a parish that might also need to be merged.”

The strategic plan accounted for many needs and transitions taking place in the local church, “but we couldn’t see every eventuality,” he said. “It’s important to note that just a little more than a half-mile away is Ascension and a little more than one and one-half miles away is St. Bridget.”

The Catholic Church has always tried to respond to the distinctiveness of various communities of faith in ways that can be sustainable, Father Laird said. The Parish Services Team is currently working with the French-speaking African community, who gathered around Father Omba Omalan­ga at St. Leonard of Port Maurice and then at St. Philip, to set up a chaplaincy to serve them at St. William in Fridley.

If St. William becomes their worship site, the “Franco­phone” community would gather there for Sunday liturgies, much like the Filipino community that meets at Guardian Angels in Oakdale for a Mass in Tagalog. 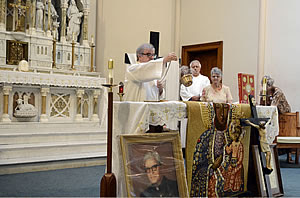 Father Michael O’Connell, Ascension pastor, blesses sacred items from St. Philip Church that were carried by parishioners during the procession to Ascension.

“But it will take some time for this to materialize.”

The Catholic Church has always made a strong commitment to the inner cities of St. Paul and Min­nea­polis. In fact, there remain five Catholic parishes in north Minneapolis alone. However, in some areas, the “number and concentration of church buildings were really designed for another era and careful evaluation indicates in some cases the number of buildings may not be optimal for ministry today,” Father Laird said.

“Rather than duplicating weaknesses, we want to build on strengths,” Father Laird said. “The excellent work that Ascension is doing in that community is now enhanced by the gift of the St. Philip’s community who will choose to come and worship at Ascension.”

Patty Stromen, parish administrator at Ascension, said Father Michael O’Connell, pastor, wrote in a Sunday bulletin: “If we have one overarching message, it is welcome, welcome, welcome.”

Besides the reception Ascension hosted after the final St. Philip Mass, the parish will incorporate several of its neighbor’s ministries, such as the Kids Club summer program and the parish’s food shelf. Parishioners also are invited to take part in Ascen­sion’s liturgical ministry, garden ministry and tutoring at the school, Stromen said.

Space is also being sought at Ascension for St. Philip parishioners to reverence the large icon of Our Lady of Czestochowa that will be moved from the church.

“We are honoring the grief and loss of the parishioners of St. Philip, while welcoming them into the life of Church of the Ascension and the shared commitment to the neighborhood in which both churches exist,” Stromen said. Catholic Spirit