No real identity crisis in time of parish transition 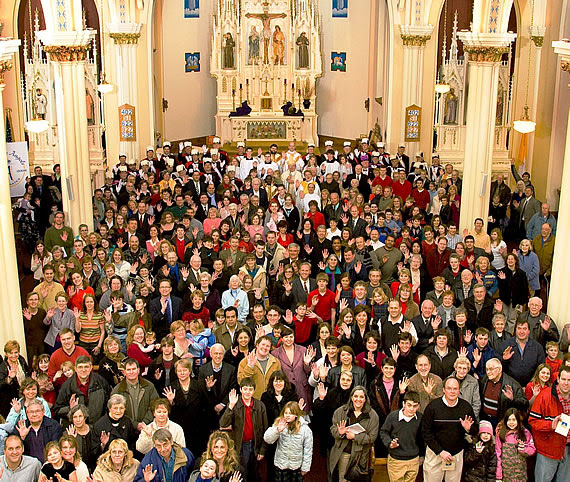 The French must have an expression for the awkward feeling of being known primarily by some association. Not by name or accomplishment, but through some relative: “Hey, you’re so-and-so’s brother, aren’t you?” Or known simply through some institution.

Believe me, I know the humbling feeling of being known largely by the parish I am assigned to. Just to make things easier for folks, I should refer to myself as “Guardian Angels’ pastor.”

Wherever I go around Carver County or the archdiocese, I know that following my introduction I’ll hear something like, “Oh, you’re from Guardian Angels Church. I’ve heard about that church. Lots of exciting things happening there! Doubled in size, I hear. You must feel privileged being assigned there, Father Pat.”

They typically smile. And then mention the annual basketball tournament at GA, or the AngelFest block party they danced at, or the beef and sausage dinner they came from miles away for, or the SayHey5K race they’re running in around Mayberry-like downtown Chaska on June 25 (register at http://www.GAchaska.org).

Those familiar with parochial schools will remember Guardian Angels School having two educators nationally recognized in the past seven years. And if they don’t know about them, they certainly know about GA School’s groundbreaking intercultural class linked with a school in Chile, thanks to Skype.

Nearly all mention the incredibly beautiful interior of the 1885 church — once referred to as the “Cathedral of the Valley” by German settlers. Southwest metro residents usually enthuse over a tour they went on in the Old Friary, one of the state’s oldest landmarks and a vestige of the century-plus Franciscan ministry in the Minnesota River Valley.

As they reveal what they know, I nod my head. And smile. It’s a well-practiced habit.

I’ll be frank. This being known by association reminds me of how I went through high school as “Mark’s younger brother” or “Anne’s older brother.”

To be honest, it’s been good for me as a continuing lesson in humility — a lesson started several years back with my mentor, friend and former rectorymate, Father Bob Cassidy, former pastor of Our Lady of Grace in Edina, and now of happy memory.

In my first year of priesthood, during a time when I think I was particularly full of myself for some minor parish project I’d overseen, Father Cassidy sat me down and set me straight.

“Let me give you some advice that’ll keep you sane, Paul,” he matter-of-factly intoned. “No matter where you’re assigned, or how well regarded you might become someday, you will be largely forgotten by parishioners within five years of reassignment or retirement. No doubt about it.”

I countered that he was still very much well-known and respected from his last assignment, to which he deadpanned: “It hasn’t been five years yet.”

Being assigned to a super-engaged parish like Guardian Angels in Chaska is especially humbling as I ponder my re-assignment on July 1 to St. Joseph in Rosemount. Over the next few weeks, Guardian Angels parishioners are no doubt going to say pleasant and polite things about my pastoral experience at GA. There will be very nice cards given to me and a tribute or two.

But, truth be told, each and every one of them will know, not so deep down, that their parish’s incredible growth, welcoming hospitality, ministry success and collaborative spirit are really parishioners’ accomplishments, not any pastor’s.

As the years go by, and the parish grows from 1,000 to 1,500 households, veteran GA parishioners will remember me as: “You know, that guy who came before Father Doug Ebert. That bald guy — um, Father Bill.”

And in archdiocesan gatherings, I’ll hear: “You’re that priest who used to be at Guardian Angels. What are they up to now?”

As Father Cassidy understood, it simply keeps the focus on who a parish is, and always has been, about: God. And parishioners.

There’s no telling how far God and parishioners will go when there’s no parish or pastor identity crisis.