A who's who of the Catholic church is in Crookston today for the ordination of Michael Hoeppner as the seventh bishop in the history of the Diocese of Crookston. A Winona, Minn. native, Hoeppner, 58, succeeds Victor Balke, who retired in September after 31 years at the helm of the Crookston Diocese.

Thursday evening, Solemn Vespers were held at the Cathedral of the Immaculate Conception, and Hoeppner, after singing the processional hymn, "The King of Love My Shepherd Is" near the baptismal font, was called forward by Archbishop Harry Flynn, of the Archdiocese of St. Paul.

Today's ordination began at 1 p.m, and a public reception was scheduled to follow at the Mount St. Benedict. In addition to Balke, dignitaries taking part include Bishop Bernard Harrington and 18 other bishops, Monsignor Roger Grundhaus, vicar general of the Crookston Diocese, and Archbishop Pietro Sambi from Washington, D.C., who serves as the pope's envoy in America. Crookston Daily Times 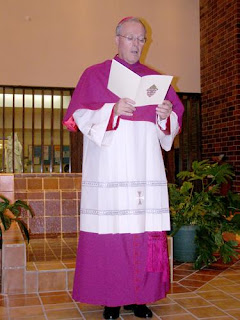 Bemidji is in that diocese. Many of them are Christian. I'm sure it was a Christian blessing (esp. with the Papal enjoy there, folks!)

A nice story, actually two of them, in the Winona Daily News: here is a link to one:
http://www.winonadailynews.com/articles/2007/12/01/news/00lead.txt

Uh, that's envoy, not enjoy. Although I hope the envoy enjoyed.
:)

I don't get too excited about Native American customs. We have polka Masses (I'm half Polish but I'm not crazy about them), at St Olaf, once a month, they have an "African Mass" with music and liturgical dancing by people from various African peoples that are living in the Twin Cities.

Catholic means "universal" and over the years lots of what we now consider to be "traditional Catholic" things probably were borrowed from pagan customs to encourage conversions.

I have just as many reservations about "polka Masses" as I would about some blessing of the four directions (N, S, E, W can somehow bless us...do we bless the directions? I'm not trying to cause problems, I really am confused.).

What is that space he photographed in? Is it a church?

I meant to write - 'what is that space he is photographed in?'

I'm not up on my Native American spirituality. But I figure that if 18 bishops and the Papal Nuncio are present for it, it can't be THAT bad.

To a certain extent I treat things like that like I try to "Keep Custody of My Eyes" and not look at certain things that pop into my vision quite regularly, on the Internet, on Television, in newspapers and magazines, walking down the street, sometimes, even at Church. I just look away.

I've become resigned to the fact that as much as I want to be, nobody has put me in charge of much other than my own life.

And that's out of control quite often.

One of my major occasions of sin is "Terry."

I've been bleeding in my mouth in my attempts to not comment on the architecture in Crookston. But "he made me do this." But, I must say, the organ pipes look pretty nice.

Being on the internet and knowing how poorly I phrase many of my posts and comments, I will refrain from commenting on Terry's grammatical error in his first post and also not tell him how he can delete his first comment so that nobody but him and his Guardian Angel would know what a doofus mistake he made.

But I won't say that.

Yes, Terry, that is a church. Indeed it is the Cathedral, ugly brick walls and all.

And Laura, my understanding it was actual Native Americans (not New Agey wannabe nuns) offering blessings to the Four Directions. IOW Catholics offering a prayer from their culture.

I've not been to an ordination before so I have nothing to compare it to. I thought it was beautiful, rich in symbolism, and very Catholic. Hearing 200 priests pray during the liturgy of the Eucharist was very moving. Seeing all the Bishops in attendance pray over Bishop Hoeppner.

We are very thankful to have a new Bishop. Please keep him in your prayers.