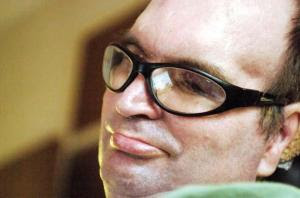 Father Tim Vakoc's funeral will be at 10 a.m. Friday at the Cathedral of St. Paul. Visitation is 4 to 8 p.m. Thursday at Gearty-Delmore Funeral Chapel, 15800 37th Avenue North, Plymouth

The Rev. Tim Vakoc once told his sister that the safest place for him to be was in the center of God's will.

"If that is in the line of fire, that is where I will be," he had said.

Five years after being injured in a roadside bombing in Iraq, the Army chaplain and former Twin Cities Roman Catholic priest died Saturday night at age 49 in a New Hope nursing home. His family declined a request for an interview and did not elaborate on the cause of death.

"A man of peace, he chose to endure the horror of war in order to bring the peace of Christ to America's fighting men and women," Archbishop John Nienstedt said in a prepared statement. "He has been an inspiration to us all and we will miss him."

Since his injury, hundreds of people followed Vakoc's progress on his CaringBridge Web site. He also had many visitors, some of whom ministered to him with massage and other alternative therapies. But just as often over the past few years, he was the one to dispense solace, despite the lasting effects of a brain injury.

"His family and many people believe that his preaching never stopped," said college friend Sue Kaiser, who last saw Vakoc earlier this month at a celebration of his ordination anniversary. "His new podium was his hospital bed. He continued to reach out to people, just in a different way. His room was always a very calm, warm and peaceful environment. I'm not a spiritual person, but when I visited him, I did feel the busyness of the world go away."

He entered St. Paul Seminary and the Army Reserve almost simultaneously. After serving at St. John Neumann in Eagan and at St. Charles Borromeo Church in St. Anthony, Vakoc became a full-time Army chaplain in 1996, first in Bosnia and later in Iraq.

"Once he got into the military, he really began to shine as a priest," said his close friend and a former seminary classmate Mike Strande. "He found his niche. And he absolutely loved being with the soldiers."

Those who knew him said he had a quick wit and a true desire to get to know people.

"I live with (the soldiers), work with them, eat with them, care for them, listen to them, counsel them," Vakoc once told the National Catholic Register. "The soldiers know if you are real and genuinely care or not. The soldiers see me out there with them, and that makes a difference."

Platoon leader Dawn Wheeler recalled in a previous Pioneer Press story how Vakoc once lifted soldiers' spirits during the first Easter season in Iraq by using bottled water for holy water and poking holes in the bottle to create a sprinkling effect.

"He made services very interactive," she said. "He would ask questions and actually call on people to answer the questions. Sometimes, you would be sitting on your hands so he didn't call on you. ... He'd send us from Mass with homework assignments."

Vakoc was wounded on May 29, 2004, the 12th anniversary of his ordination. It is believed he was driving a Humvee back to base after celebrating Mass in Mosel, Iraq, when a homemade bomb was thrown through a window. Shrapnel exploded into the side of his skull and left eye. Two passengers were unhurt.

He underwent surgery in Iraq and intensive care in Germany before his transfer to Walter Reed Army Hospital in Washington, where he battled a stroke and infections. He eventually stabilized enough for a move later that year to the VA Medical Center at Fort Snelling, which specializes in rehabilitation after traumatic brain injuries. In December 2005, he was discharged to the St. Therese nursing home in New Hope.

During the next several years, his progress defied prognosis. After doctors felt they had done everything they could, family and friends volunteered to help with exercises and alternative therapies. He emerged from an unresponsive state and at the end of his life understood and responded to those around him, friends said.

"He became an inspiration to me because of his tenacity to get better," Strande said. "He had such a love for life."

Earlier this month, dozens of friends and family members gathered in the nursing home chapel for a special Mass commemorating the anniversary of his ordination and his recovery thus far.

He was able to hand his goddaughter Communion, the first time since his injury, and utter a benediction of "God bless."

Dear Fr Tim, please pray for me and my family - and thank-you for your inspirational witness!