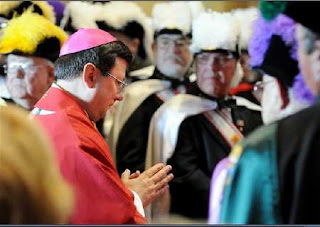 .
Yesterday was the consecration of Father Lee Piché, the Vicar General of the Archdiocese of St. Paul and Minneapolis as Auxiliary Bishop of the archdiocese. Over 3,000 (S.R.O.) were in attendance, perhaps 250 priests (who vested themselves in alb and stole), 100 Fourth Degree Knights of Columbus, perhaps an equal number of Knights of Malta and Knights of the Holy Sepulchre and their Dames, untold number of religious sisters and brothers, ecumenical guests, friends and family joined parishioners of the archdiocese for the wonderful celebration and Mass. A reception was held afterwards in the Crown Plaza Hotel in downtown St. Paul.

Bishop Lee Piché was ordained as a bishop by Archbishop John Nienstedt, Archbishop Emeritus Harry Flynn (who flew in for the day from Albany where he is on vacation) and Bishop John LeVoir of New Ulm. The Bishops of Crookston, Winona, Superior and Sioux Falls were present as were the retired Bishops of Crookston, Winona and Superior. Bishop Richard Pates of DesMoines, formerly Auxiliary Bishop here was also present. A represenative of the Diocese of Duluth was present. That diocese is awaiting a new appointment after their Bishop Dennis Schnurr was appointed Coadjutor Archbishop of Cincinnati. Bishop Kinney of St. Cloud is recovering from surgery.

The "Rite of Ordination" included the presentation of Bishop Elect Piché, the reading of the Apostolic Appointment Letter from the Pope, a request for Consent of the People (applause), a homily by Archbishop Nienstedt and an examination of Bishop (which he passed). This was followed by the Laying on of Hands by all the Bishops present, the presentation of the Book of the Gospels, a Prayer of Consecration, the Annointing of the new Bishop's head (soiling Bishop Piché brand new zuchetto (skull cap), later admitted Abp. Nienstedt) and then the Investituure of the Ring, Mitre (pointed episcopal hat) and the crosier, the pastoral staff (many nodded approvingly at the sight of the traditional shepherd's crook style). This was followed by the Offertory of the Holy Sacrifice of the Mass.

It was a magnificent ceremony. The Liturgists in charge of major events at the Cathedral/Shrine of St. Paul are some of the brightest and most solid young priests in the archdiocese. Seminarians from our St. Paul Seminary served as acolytes.

The music was provided by the St. Agnes High School Concert Chorale and Chamber Choir, their Schola Cantorum and members from the choirs at the three parishes where Bishop Piché had served as a priest. They even sang a Te Deum, the first time I had been present for one.

As an aside, it has been an interesting and holy weekend for me. Friday was the funeral of Father Tim Vakoc, the Army chaplain who was severely wounded in Iraq by a roadside booby trap bomb. Saturday was an all day Divine Mercy Conference at St. Kate's U. Sunday afternoon was the closing ceremony for the Year of St. Paul at the St. Paul Cathedral/Shrine. And then yesterday with the ordination ceremony.

And it was nice that I saw friends at each of those events. There was a long period in my church going life where I didn't know anybody. In and out with my closely held private liturgical life.
Posted by Unknown at 12:01 PM