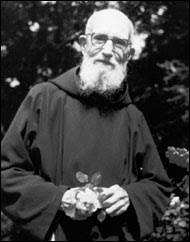 David Nantais has a nice article in America about Venerable Solanus Casey, the American Capuchin whose canonization cause is currently under consideration:
The Solanus Casey Center is an urban oasis on Detroit’s east side, situated among signs of death and decay. Much of the surrounding neighborhood is a distressing collection of crumbling homes and vacant lots, stark reminders of the 1967 summer riots when Detroit burned. To the west is Mt. Elliot Cemetery, one of the largest Christian burial grounds in the city. As desolate as it is, this setting is an ideal location for a memorial to Venerable Solanus Casey, a Capuchin Franciscan who devoted his life to serving the city’s poor, sick, outcast and suffering people. Father Solanus had an ability to see potential and beauty in people and situations where others saw only human refuse and devastation. The city of Detroit itself is much in need of realizing the potential it holds beneath its grimy exterior, and Father Solanus would make an especially appropriate patron saint.
Bernard Francis Casey, known as Barney, was born in Prescott, Wis., on Nov. 25, 1870, to an Irish immigrant family. As a young man, he had a momentary experience of the brutality of the world that radically shifted his concept of life. While at work as a trolley conductor in Superior, Wis., he once saw a drunken sailor standing over a woman lying on the tracks; the sailor held a knife in his hand and yelled at the woman, threatening her life. Casey realized that this incident was not an isolated one—that the world was full of such violence. He also realized he wanted to make things better. He prayed for the sailor and his victim, and a few days later told his pastor that he wanted to become a priest.
At St. Francis De Sales diocesan seminary in Milwaukee, Casey floundered academically in courses taught in Latin and in German. After four years there he was advised to enter a religious order instead. He entered the Capuchins at St. Bonaventure’s Monastery in Detroit on Christmas Eve 1896. He received the habit and took the name Francis Solanus, by which he would be known for the rest of his life.

Solanus’s superiors believed that his struggles with academic work during formation would prove an impediment to full priestly status, so they ordained him a “simplex” priest, one who could neither preach nor hear confessions officially. He performed rudimentary duties like serving as porter at the monastery. Yet Solanus fully embraced his mission and greeted each person with such joy and respect that it evolved into a ministry of hospitality and spiritual counsel. Because of his gentle nature, which put people at ease and encouraged even the despairing to hope, Solanus earned the nickname “the holy priest.”

Father Solanus’s caring presence and reputation for listening intently to each person also drew thousands to the monastery. “Do we appreciate the little faith we have?” Solanus once asked a friend. “Do we ever beg God for more?” Solanus counseled his visitors to do both. He welcomed alcoholics and the homeless in the same way he welcomed local dignitaries like Mayor Frank Murphy. By looking beyond the superficial—a person’s drunkenness, addiction, poverty, grief or uncouth behavior—Solanus showed people their reflection as “beloved” in God’s eyes.
One person who made the short pilgrimage across town to St. Bonaventure’s was my grandmother’s sister, Mary Louise. She brought my aunt Debby as an infant to Father Solanus because the child suffered from a painful skin condition, and home remedies had proved inadequate. Soon after the visit to Father Solanus, Debby’s skin cleared up. When I recently heard my Great-aunt Mary Louise recount this story, I was amazed not only by the outcome, but by her faith in the humble Solanus, whom she still reveres.

During the Great Depression, unemployed men lined up outside St. Bonaventure’s asking for food; Solanus helped to provide soup and sandwiches. Soon the few dozen men the Capuchins fed each day grew to hundreds. Father Solanus worked at the soup kitchen, recruited volunteers and elsewhere begged for food and funds to keep the kitchen open. One day food supplies ran short and the staff became concerned that a riot might break out. Solanus assured them that God would provide and invited the men in the line to join in praying the Our Father. Within minutes a bakery truck pulled up, full of donations for the soup kitchen. “Nobody will starve as long as you put your confidence in God,” said Solanus.

Today the spirit of Solanus Casey is alive at the Capuchin soup kitchen, which has found new ways—like the Earthworks project—to peel back the surface of blight and expose the richness and potential within. One of the first of its kind, the Earthworks project grows hundreds of pounds of food each season on 1.5 acres of urban garden, some of it to feed the homeless and some to sell for revenue. Earthworks is not only an agricultural endeavor but also a community development project like dozens of others sprouting up around the city. Neighbors cooperate to clear vacant land (some formerly occupied by a crack house) and recruit local kids to lend a hand and make connections with the earth. To gaze upon soil permeated with pollution (the E.P.A. calls them brownfields) and see possibility—that is the spirit of Father Solanus.

Solanus long practiced his ministry of presence, listening and praying. He never turned people away; in fact, he wanted to see them as soon as they arrived, even at the expense of his own plans. But the ministry exhausted him. Sometimes he would fall asleep while praying in the monastery chapel and startle his fellow Capuchins when he awoke and sat upright in the pew.
When Father Solanus passed away on July 31, 1957, people lined up for two straight days to view his body before burial. Detroit had lost a saint.
It was inevitable that the cause for Solanus’s canonization would be introduced, considering how much he was loved and the thousands of people he had helped. A petition to begin the process was filed under Cardinal John Dearden in 1981. Six years later, Solanus’s body was exhumed and found to be intact. It was transferred to a new coffin and reinterred in a tomb beneath the floor of St. Bonaventure’s, in what is now part of the Father Solanus Casey Center. Each year hundreds of people visit, leaving their requests for prayers and favors on folded pieces of paper above Solanus’s tomb. In 1995 Pope John Paul II declared Father Solanus “venerable.”

His cause for beatification, according to Richard Merling, O.F.M.Cap, director of the Father Solanus Guild, requires one medically verified healing miracle. A number of documented miracles have been sent to Rome, and the guild is awaiting approval. If Solanus is canonized soon, he could become the first U.S.-born male saint.
Detroit has suffered for a long time, and recent financial problems, a crumbling urban infrastructure and a corrupt former mayor have deflated the spirits of many residents. If Father Solanus were alive, he would be saddened, I think, but he would not stand idle. No, he would encourage people to search for the budding grace of God, present among them like a lone flower in bloom among the weeds and trash of an abandoned city lot.
Posted by Unknown at 5:28 PM