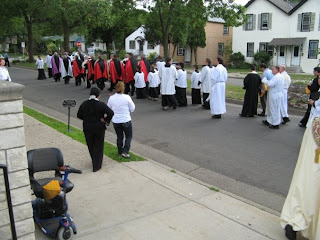 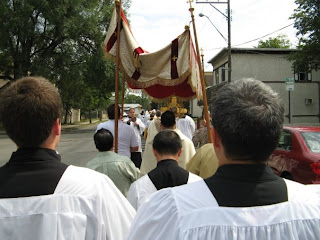 I didn't sleep much Saturday night - only two hours or so. Probably due to the two liters of Diet Coke that I drank.
Sunday morning I had to pack up all the radio gear which I had stored after the Minneapolis May Day Rosary Procession.

I had started charging all of the 29 radios Friday night and then attached the speakers, organized them, etc. Then I went to Mass, then over to the Little Sisters of the Poor residence near downtown St. Paul about 12:30, organized the radios and speakers near the entry way and instructed the man who would be in charge of distributing them and keeping them separated widely enough so that the people could sing and pray along with the two cantors (one in Spanish).

The Little Sisters run a beautiful, caring residence. Their backyard garden is gorgeous. I left there at 1:30 to get back over to Northeast Minneapolis I-94 was closed for a stretch).

Five of the six in our schola were going to lead the singing in Nordeast (called that because of all the Eastern European ethnic nationalities that settled there); we had borrowed cassocks and surplices from St. Raphael's and we were right behind the canopy and Monstrance.

Fortunately at St. Raphael's fathers & sons often serve together so they have adult sizes. Mine was big enough around, but a tad long. I worried I would trip. I shuddered as I recalled from the olden days a classmate who tripped and rolled down the steps of the altar while carrying the Gospels to the left side. He recovered with aplomb and I don't recall anybody teasing him the next day in class.

We sang pretty much the standard hymns, but sometimes with unfamiliar words. There were Spanish language speakers in the procession with us who spelled us with their hymns and a decade of the Rosary in Spanish. Next year we should learn some of them and perhaps the responses to the Our Father and Hail Mary in Spanish.


It had been a mighty long time since I had been dressed liturgically properly (we wear albs where I occasionally serve Mass. I don't think that's proper. Father's probably too frugal to buy a bunch of cassock and surplices. Albs kinda are "three sizes fit all").

We started at Holy Cross parish at 3:00, led by altar boys with crucifix and candles (which I knew would blow out, and they did), They were followed by the 4th Degree Knights of Columbus Honor Guard, a small flock of younger altar servers, a passel of priests and deacons, maybe a dozen, the monstrance under a canopy carried by a priest, then ourselves followed by a long line of parishioners.

We visited seven Northeast parishes, many of then ethnic, stopping at each for short prayers, adoration and hymns. The route was flat, and probably somewhat over a mile in length. Starting at Holy Cross, where they still offer the Mass in Polish, crossing University down to St. Cyril & Methodius, then crossing Broadway to St. Anthony of Padua (originally an Irish parish), then continuing south heading back to University down to St. Boniface, then St. Maron's Maronite (Lebanese), then across University Avenue to St. Constantine Ukrainian Catholic and ending up over at All Saints. It was very interesting being in all those parishes. Most had choirs greeting us with their ethnic hymns. (Adding Our Lady of Lourdes, the French parish and St. Hedwig's, another Polish parish, to our route would have made the route way too long.

St. Anthony is the oldest parish in Minneapolis, dating back to the time when the area east of the Mississippi was the Village of St. Anthony (adjacent to the St. Anthony Falls in the river, a major source of water power in those days). Something I did not know, the much larger area west of the river, called Minneapolis now, was originally called "All Saints." I don't know if the All Saints Parish dates back to that time or not. Before the Civil War, Minneapolis merged with most of St. Anthony, assuming the former's name.

The priests carrying the monstrance spelled each other at some of the parish stops so it wasn't nearly as taxing for them as at the uphill trek in St. Paul. The pastors of the participating parishes lead the devotions at their own parish.

St. Maron's had hospitality for us at the end. But I passed. I was exhausted and parched. I visit patients in a hospital a couple times a week, probably walking well over a mile each time, but I could have been in a lot better shape. I'll have to do some vigorous roadwork training next year. I bought a shake at McDonald's and headed over to Cosetta's to join some of the St. Paul volunteers for a sandwich, some ice tea for more thirst quenching and a Heinekens.

It was a lot more difficult than I had originally thought to sing strange lyrics (the tunes were familiar), avoid running into the singer ahead of me (the procession was a bit herky jerky) and also avoid stepping on my cassock which hung to about a quarter inch from the pavement. I did step on it a dozen times or so, but I didn't tear it or fall. Minneapolis Police Reserves escorted us. There weren't big crowds watching us but there seemed to be people watching us just about all the time. Most of the route was along residential streets.

The weather was warm and glorious. The attendance at these Corpus Christi events get larger each year. Besides the large one in St. Paul (see Cathy of Alexandria's report here), I know that St. Agnes had their parish procession also in St. Paul and St Bonaventure had theirs in Bloomington. I'm sure there were more. Next year I'll have to do a preview report.

I was expecting some photographs of the Procession, but apparently one of my schola mates is still recovering from his exhaustion. I'll post 'em when I get 'em.