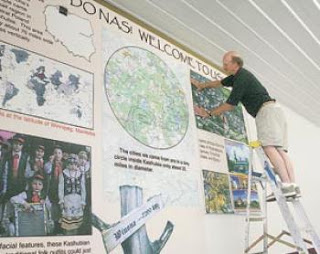 .
Winona artist and framer John Durfey does the painstaking work
of hanging a 160-foot mural in the Polish Museum Annex.
The mural, more than two years in the making,
is a celebration of Winona’s Polish immigrants.

“Nobody saves the history of poor people. I wanted to do that, in big, readable images,” said Father Paul Breza, waving his arm across the large expanse of wall that will soon be filled with Winona’s Polish history.

Work started Thursday hanging a mural that will stretch 160 feet across the walls inside the Polish Museum Annex, and seeing the project coming to life gave Breza cause to reminisce about its humble origins.

Some 30 years ago, Breza had a dream for a museum that would honor Winona’s rich history of Polish immigrants, most of whom came from poor families but formed the underpinnings for life and industry in Winona’s East End.

In a vacant printing plant on East Second Street he created the fledgling project, urging Winona’s Polish to gather and speak their native tongue to help them remember and celebrate their heritage.

Over time the project grew, floors got replaced, the building got heat and air conditioning, and articles commemorating the Polish culture were collected and placed on display.

In those early days Breza and the staff fought heartily over whether the museum should charge an admission, with Breza prevailing in the end. A museum honoring poor people must be free, he insisted. The financial help it needs will come from those who have the money to give.

Indeed, the mural project embodies exactly that synergy, with an unlikely contribution coming its way just when Breza didn’t know where the money would come from but spent his time doing kind deeds instead of looking for it.

Breza had envisioned a long, proud display that could adorn the white walls in the Annex Building, and for years collected information and pictures that could someday be included on it.

He wrote a grant and received $6,000, but was bowled over when he learned that a mural big enough to cover both walls in the building would be twice that.

The project languished, because $6,000 might as well have been a million dollars to the museum that makes its way largely on memorials and volunteers.

Breza received a call one day asking him if he would offer funeral services to a man named Mike Mrozek from Plano, Texas.

Mrozek, who died in his prime, wasn’t even Catholic, but he was Polish through and through and had met Breza on several trips to visit Winona, the place where he was born.

Breza said he helped Mrozek find distant members of his family and regaled him with stories about Winona’s Polish heritage. Mrozek, who had moved away as a boy, was fascinated by it, and Breza and his museum earned a fast friend.

When the family called from Texas to ask if Breza would conduct the funeral, the right thing to do was say yes, even if it meant driving to Texas.

Through a blizzard, Breza inched his way south, counting cars in the ditch for amusement and believing if he kept on he was probably going to drive out of the storm.

In Texas, Mrozek’s family was exceedingly grateful, telling Breza how important the visits to Winona had been to Mike. Was there anything, any project, they wanted to know, that they could make a donation to on his behalf?

“I told them I had this mural project but it was going to cost $6,000 to finish, and they asked if I wanted cash or a check,” he said.

And with that the dream was alive again, albeit in micro-sized images on a computer as it was painstakingly pieced together. With the help of a graphic artist at Genesis Graphics, Breza labored over words and pictures for months until the proofs were completed.

The old guard of Winona’s Polish families are dying, Breza said, but he is grateful to have the project completed so that the ones remaining can see it with their own eyes. “I want them to see it and be proud of it and march their grandchildren past it,” he said.

Bishop Quinn will bless the mural at a celebration in the Museum Annex on August 15, the same day as the traditional Blessing of Flowers and the Harvest.

Father Breza will be there, so will many of the Polish families whose ancestors made Winona home. But there will be many others there in spirit, from the bright-eyed Kashubian children looking out from the mural to Mike Mrozek, who made it happen without even knowing it. Winona Post