Bishop Sirba no stranger to the Northland 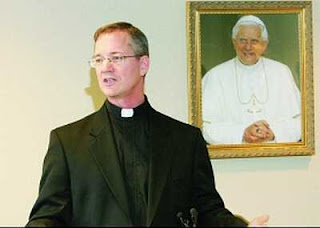 When the Rev. Paul Sirba listened to a message left by a high-ranking Vatican diplomat last month asking for a call back, the Twin Cities vicar general thought it might be a fellow priest playing a common joke.

“I don’t want to get my friends in trouble,” Sirba said with a smile Thursday, “but every once in a while they would leave a message saying ‘this is the apostolic delegate and you’re the next bishop of wherever’ kind of thing.”

But the call from Archbishop Pietro Sambi was for real, and it was to ask Sirba to become the ninth bishop of the Roman Catholic Diocese of Duluth.

“I’m humbled in the confidence Pope Benedict XVI had in appointing me,” he said. “Obviously, I’m new at this; they don’t have a bishop school. I’m delighted to be a servant this way but I have a lot to learn.”

Sirba, 49, has served as a priest in the Twin Cities since 1986, and was appointed vicar general and moderator of the curia for the Archdiocese of St. Paul and Minneapolis by Archbishop John C. Nienstedt on July 1. Before that, he was spiritual director at the St. Paul Seminary for three years. Sirba succeeds Archbishop Dennis Schnurr, who was named coadjutor of Cincinnati a year ago.

St. Rose parishioner Lucy Shovein said her church has been praying for months for a new bishop.

“I think it’s about time,” she said. “He’s young, and it’s kind of like a big weight has been lifted off our diocese.”

The Rev. William Graham received a flurry of e-mails and phone calls Thursday from metro-area priests “offering us their congratulations, each one saying he is a good and kind and holy man,” he said.

Graham, director of Catholic studies for the College of St. Scholastica and a priest with the Duluth diocese, said people are looking to his arrival with “joyful hope.”

Sirba, a Bloomington, Minn., native, said he has spent a lot of time in the Northland. His eldest brother, the Rev. Joseph Sirba, is a long-serving priest in the Duluth diocese at St. Edward’s Catholic Church in Longville.

Sirba said he likes to hike and travel and credits his family with helping him choose the religious path he took as a senior in college. He plans to take time to get to know the parishes of the diocese and the priests, deacons and parishioners.

Shovein said she hopes the new bishop works toward building enrollment in the diocesan schools and memberships within churches.

Joyce Gagne, also of St. Rose, said Sirba has a difficult job ahead of him.

“I’m hoping for a bishop that follows the teachings of the church and that is a good shepherd and compassionate,” she said. “That speaks out and defends our faith.”

“We’re excited to finally get a bishop,” she said.

The diocesan administrator for the Diocese of Duluth, Father James Bissonette, was pleased with the news.

“It is a great blessing to the Diocese of Duluth that our Holy Father Pope Benedict XVI has sent us our next shepherd, Bishop-elect Paul Sirba,” Bissonette said. “I have known Bishop-elect Sirba since our seminary days. I know him to be a very good man and a fine priest with a deep spirituality.”

The ordination and installation of Sirba probably will happen in early December in Duluth, he said.

The appointment to bishop comes soon after the July promotion. Usually assignments last a little longer, Sirba said, “but God sometimes picks you up and moves you different places.” Duluth News Tribune

This is great news! I did not realize his brother was already serving in that Diocese.

I have a feeling that Fr. Sirba has Iron Range roots. I'd bet dollars to doughnuts that the name was originally spelled "Srba."

Slovenia, Serbian, Croatian, one of those nationalities of the South Slavs who started coming to Minnesota in the late 1890s or so to work in the mines. Many of them went back to fight in the interminable Balkan Wars that precipitated World War One.