The Lord Gives and The Lord Calls Back: More on the Bridge Tragedy

One moment, South Dakota native Peter Hausmann was on his cell phone, telling his wife that traffic in downtown Minneapolis had almost ground to a halt. Then his cell phone went quiet, and Hausmann never made it home.

Hausmann, who grew up in the Bonesteel, SD, area, now is among the missing after the Interstate 35W bridge collapsed during Wednesday's rush hour.

Hausmann, 47, who lives in the St. Paul suburb of Rosemount, Minn., was near the bridge at the time of the collapse, his relatives said.

"The only thing they're telling us is that they have not located him or his vehicle and that they may not find him for a while," his brother, the Rev. Leo Hausmann, a priest at St. Patrick's Catholic Church in Wall, SD, said Friday afternoon.

To find vehicles that plunged into the Missouri River, divers felt their way through murky water, pressing within inches of submerged cars to read their license plates. The current pushed them around, and over their heads, pieces of steel hung precariously from the wreckage.

Hausmann had left his job in the Minneapolis suburb of New Brighton shortly after 5:30 p.m., said Jeff Olejnik, president of Assurity River Group, where he works.

"From what I understand, he was on his way to pick up a dinner guest from Kenya they planned to have over," Olejnik said. "Peter spent two or three years in Kenya on a mission trip."

[His family says they should have been celebrating: Hausmann had just learned that the Kenyan government had ordered a new investigation into the 2000 shooting death of his friend, the Rev. John Kaiser.]

Hausmann met his wife, Helen, on one of those mission trips, Olejnik said. They have four children together.

Around 6 p.m., Hausmann was talking with his wife on his cell phone and mentioned to her that traffic was almost stopped.

The bridge collapsed around that time, at 6:05 p.m.

"I don't know what his exact location was, if he was on the bridge or what," Jim Hausmann said. "We assume he was."

When he never showed up at home and relatives could not contact him by cell phone, Leo Hausmann said, "we presumed that he was one of the victims."

Peter Hausmann works in computer security at Assurity. He has more than 20 years of experience in the field and has worked with many financial institutions to develop their information security programs, according to the firm's Web site.

"We sent out a letter to some of our clients this morning," Olejnik said. "It's amazing how many people he's touched. He's a real role model."

At the scene of the collapse Friday, authorities said a fifth body had been recovered from the wreckage.

Relatives said Helen Hausmann was at the site during the day, as divers continued the slow search for vehicles and victims. With only about 6 inches of visibility, the divers wore plastic gloves and used what Hennepin County Sheriff's Capt. Bill Chandler called the "Braille method."

"They've got to feel their way around with the car right in front of their face and call out the license plate," he said.

When it came to going through the vehicle, he said, "It's actually easier with your eyes closed." Sioux Falls Argus Leader 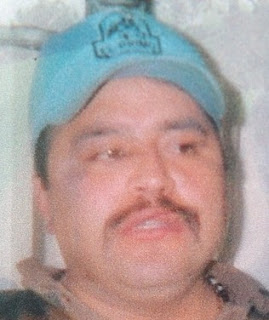 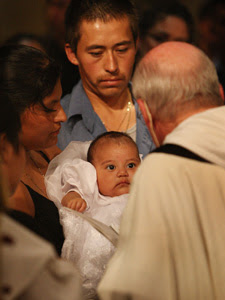 Fr. James Barnett, baptizes Lorena Trinidad-Martinez following a funeral mass for her father Artemio Trinidad-Mena at Holy Rosary Church in Minneapolis on Saturday. Trinidad-Mena, the father of four children including a young baby, was killed in the collapse of the I-35W bridge on Wednesday. MN Public Radio

At 5:30 p.m., he had hopped into his Ford F-150, the truck he had saved and borrowed money to buy three weeks before, and was on his way to visit a friend over the 35W.

Wearing a cowboy hat and a jovial smile, Trinidad-Mena traveled around the Twin Cities selling Latin foods such as frijoles, chilies and tomatillos to restaurants and grocers.

He had been sending money to three of his children, who are being raised by their grandparents in his home town of Santa Lucia. He called them regularly, going through several long-distance phone cards a week. He wished to eventually return to Mexico, his friends said.

His wife, Abundia Martinez, moved here last year. They were raising their fourth child, a 2-month-old daughter, in a modest home in the heart of a south Minneapolis neighborhood that has become an enclave for immigrants.

Friends said that, after the bridge collapsed, they called his cellphone. Then, a few hours later, they saw his truck on television, flipped on its side and smashed underneath a Jeep. By Friday, when they called his phone again, a message in Spanish said that it had been disconnected.

"Muerto," -- dead -- co-worker Jose Riera, 41, said of his friend Friday. "He was the best person I've ever seen in my life," Riera added. "This guy was incredible. I've never met another person like Artemio."

Jose Alvarado, 43, said: "We were like amigos. We were family. He was a great, beautiful person."

Outside the warehouse, co-workers set up a makeshift memorial: purple and white roses, perfumed candles depicting the Virgin Mary and framed pictures of Trinidad-Mena, 29, smiling.

A huge Mexican flag hung above. A cardboard box was set out for donations to pay for the return of his remains to Mexico. Washington Post

Earlier Sunday at Holy Rosary Catholic Church in Minneapolis, worship home to many Hispanic Catholics, 15 children who endured the bridge collapse stood in front of hundreds of parishioners, receiving a blessing and applause.

A couple of the younger children smiled as the Rev. James Barnett led the congregation in prayer in Spanish. Others bowed their heads, holding votive candles, which were later placed, with carnations and dozens of roses, beneath an image of Our Lady of Guadalupe.

"They are better now," said Rosa Martines of sons, Alexis, 12, and Christian, 6, who were on the bus and at the service. "But still, they cannot sleep at night."

Barnett and the parishioners celebrated the children's heroism and escape. They also remembered Artemio Trinidad-Mena, 29, a driver for New York Plaza Produce in Minneapolis who died in the bridge collapse. On Saturday, a funeral mass for Trinidad-Mena was held at the Phillips neighborhood church and was followed by the baptism of his 2-month-old daughter, Lorena.

"We're trying to move to some kind of closure," Barnett said. "Despite the sadness, there's a new hope." StarTribune

Eternal Rest grant unto them O Lord, and let perpetual light shine upon them, and may their souls and all the souls of the faithful departed, through the Mercy of God, rest in peace. Amen
Posted by Unknown at 10:27 AM

These stories are heartbreaking.