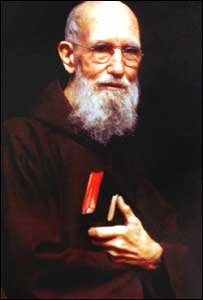 .
One of my favorite people in the category of Not-Yet-Officially-A-Saint is Solanus Casey (others on my list would include Dorothy Day, Oscar Romero and Charles de Foucauld).

Fr. Casey was a simple Capuchin friar from Detroit and New York City who never received the full faculties of the priesthood, but was a powerful and prayerful presence in the lives of countless people.

Now, a Milwaukee woman is adding her story to the list of possible miracles that can be attributed to this holy man:

The details are a bit fuzzy in Mary Cherubini’s mind, but that’s understandable as it’s been some 60 years since she met the man she calls “her saint.”

One thing that’s clear in 84-year-old Cherubini’s mind is the belief that the blessing she received in Detroit in the early 1940s from Capuchin friar Solanus Casey is a key reason she can see today, in spite of a genetic eye ailment that threatened her vision.

Wearing thick glasses, and noting that she’s had two corneal transplants, one as recently as last fall, Cherubini told your Catholic Herald about the blessing that altered her life.

Shortly after she graduated from Denby High School in Detroit, she began having vision problems. At the suggestion of a neighbor who also had a daughter with vision troubles, she went to St. Bonaventure on Mt. Elliott where a simple Capuchin friar was gaining a reputation for prophecy and healing.

The friar, Fr. Solanus Casey, has strong ties to Wisconsin. He was born Nov. 25, 1870, on a farm in Prescott along the banks of the Mississippi River, the sixth child in a family of 10 boys and six girls. The family moved to Superior where he spent his youth. After working as a logger, streetcar motorman and federal prison guard, he enrolled at Saint Francis Seminary in St. Francis in 1892, intending to become a priest. He struggled, however, with the seminary’s German language curriculum and seminary administrators suggested he join the Capuchin Order. In 1904, at age 33, he was ordained a priest by Archbishop Sebastian Messmer at St. Francis Church, Milwaukee, but because his German was still weak, he was barred from preaching or hearing confessions.

Fr. Casey spent the next 20 years in New York, before arriving at St. Bonaventure Friary in Detroit in 1924 where, as porter at the monastery door, he greeted thousands of people. He may have fallen short academically, but Fr. Casey’s reputation grew as a man who listened and connected with people. His deep faith drew people to him and Cherubini, a member of Three Holy Women Parish, Milwaukee, recalls waiting in a long line at the monastery for her chance to be blessed by the simple priest.

While she recalls few other details about the blessing, Cherubini said after she met Fr. Casey her vision was good enough that she was able to work as a stenographer for years.

“After that blessing, I just felt, I’m going to be OK. I was able to work for many, many years with that blessing,” she said, adding, “I think it was a special thing.”

This year marks the 50th anniversary of Solanus Casey's death. To read more about him, visit this website. Offer a prayer, or whisper a petition. You never know what miracles might come.


Stella Borealis Posts on Servant of God, Solanus Casey
Posted by Unknown at 9:47 AM

Father Solanus Casey is my favorite Not-Yet-Officially-A-Saint person. He's one of the people/saints I have in my "petition litany." What a wonderful story. Just saw the EWTN show about his life for the second time about a week ago. My aunt has a book on him which I will have to borrow.

But it is miracles after the death of the supposed saint that count towards beatification. Miracles before death do not. Nonetheless, Venerable Solanus was and is an astounding person. Please pray that his cause for sainthood continue to develop and mature.