Bishop Hoeppner Pleased to be a "Mississippi River Rat" in Crookston; but now he has the "Red River" to really pray about! 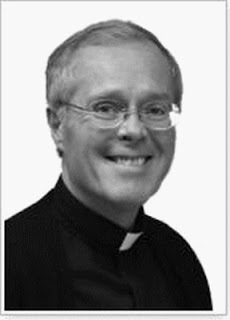 .
The Rev. Michael Hoeppner got a call that turned out to be the call.

As he was driving to Austin, Minn., with Winona Bishop Bernard Harrington Hoeppner’s cell phone rang. It was Archbishop Pietro Sambi, Pope Benedict XVI’s representative in America. The Holy Father had named Hoeppner the Bishop of the Crookston (Minn.) Diocese.

Sambi knew Hoeppner was on the road with Harrington and asked him to call back in an hour.

“OK,” was about the only words that Hoeppner could find when he was told the news.

Hoeppner pulled the car over and asked Harrington to drive the rest of the way. On their way to Austin, they continued in prayer together, saying the rosary.

When Hoeppner called back, Sambi asked, “Do you accept?”

“Gratefully, I do,” Hoeppner replied.

Winona’s native son will leave one corner of the state and head to another.

“I am just delighted. It’s a very happy day,” Hoeppner said. “I grew up a river rat and now I am going to be in the diocese that has the Mississippi River headwaters in it. They also probably didn’t want to appoint someone who doesn’t love the Minnesota winters. I love Minnesota.”

The pope accepted the resignation of longtime Crookston Bishop Victor Balke on Friday. Hoeppner served as the Vicar General of the Diocese of Winona.

“I have enjoyed working with Bishop Harrington — he is a very pastoral bishop,” Hoeppner said. “People have asked me what I plan to do first, and I’ve told them I want to visit the parishes and the priest and be that kind of pastoral bishop.”

Hoeppner, 58, now the bishop-elect, is scheduled to be ordained a bishop and installed Nov. 30 in Crookston.

Hoeppner was born June 1, 1949, to Joseph and Anna Hoeppner in Winona and has three siblings, Patricia, Edward and Mary. He attended Cathedral Elementary School, Cotter High School, Saint Mary’s College and Immaculate Heart of Mary Seminary, all in Winona. He was ordained to the priesthood for the Diocese of Winona on June 29, 1975, by Pope Paul VI at St. Peter’s Basilica in Rome.

He served at number of parishes in the Winona Diocese, including St. Stanislaus Kostka and St. Casmir’s in Winona, and parishes in Minnesota City, Lewiston and Altura.

“He is well-prepared and well-qualified, and I know the people and the clergy of the Diocese of Crookston will welcome him with open arms and work with him to build up the Church of Crookston,” Harrington said.

Balke, who will turn 76 on Saturday, was ordained a bishop Sept. 2, 1976, in Crookston. Bishops are required to submit their resignations to Rome when they are 75.

Balke said during spring 2006, he had asked to retire and in recent months has told the Grand Forks Herald he was looking for it to happen sooner, rather than later.

Mary Gautier of the Center for Applied Research in the Apostolate at Georgetown University in Washington said Balke has been a bishop in his diocese longer than any other active bishop.

The Crookston diocese includes 14 counties in northwestern Minnesota and serves about 36,000 Catholics.

Balke has been seen as one of the more progressive bishops in the U.S. Roman Catholic church, particularly in his promotion of women to leadership roles. For example, he has appointed nuns as pastoral administrators and associates of parishes.

He also spoken publicly in favor of ordaining married men, although he supports the church position that women should not be priests.

Balke has, at times, taken public stands on controversial issues. He said in 1993 that he would not willingly pay his federal income taxes if Congress mandated public funding of abortions. He also came out against the Vietnam War in the 1970s.

He wrote about the Iraq war in the most recent issue of the diocesan newspaper. He said he thought the decision to go to war a mistake, but said the next move had to be decided by military and political leaders.

“I dare say, and this is saying a lot, that we can and must pray that the terrorists, even Osama bin Laden, will turn from their violent ways to thoughts and works of peace based on justice. Nothing is impossible for God!“ Winona Daily News

For those of you not familiar with Minnesota geography, the "Red River of the North, the border between Minnesota and North Dakota, has its source near Breckenridge, MN, and flows north, through Lake Winnipeg to Hudson Bay. This means that as Spring comes and the melt begins in Breckenridge, the ice is still frozen to the north and annual flooding of the Red River as water backs up when it encounters the ice is a common occurrence, causing much concern to the towns along the border, affecting particularly Moorhead and East Grand Forks in the Diocese of Crookston. Bishop Hoeppner will regularly be calling for prayers to avert floods in the springtimes. Winona got rain last month.

Fargo In-Forum article on the appointment.

Ray, I know you are probably like Terry in not liking silly things, but I don't often pass along these type of things. You have been awarded a Mathetes award. Check out my blog for details.