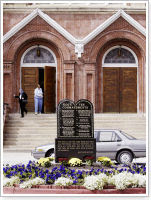 .
This one sits in front of St. Mary’s Catholic Church, where the cathedral’s new rector hopes it will be a reminder for people to live by its principles.

“When I came here, I was praying and was really moved to place that monument as a reminder to the people here as they come into the church that God loves them very much,” said the Rev. Chad Wilhelm, who was installed as rector on Sept. 8.

The 5-foot black granite monument was dedicated the same day. It features the commandments on one side and the beatitudes on the other in gold lettering. It also includes two passages from Matthew.

The monument was donated by George and Paulette Lacher of Fargo in honor of their families, Wilhelm’s installation, former rector the Rev. Peter Hughes and the late Bishop James Sullivan.

Lacher was Sullivan’s personal assistant. He recalled Sullivan once telling him, when debate about the Ten Commandments monument in front of Fargo’s City Hall started, to go get the monument and put it in front of St. Mary’s.

This year has seen renewed debate surrounding the city monument, which opponents say crosses the line between separating church and state.

After denying a request by the Red River Freethinkers for a sister monument, Fargo City Commissioners voted June 18 to move the Ten Commandments monument by donating it to a private entity. Commissioners reversed their decision July 2.

In late August, the commission voted to not allow any new monuments on the civic plaza, leaving legal action as the Freethinkers’ only option.

“We have not made any decision about going to court over the monument,” Freethinkers President Jon Lindgren said last week.

Lindgren said his group has no objections to the monument outside St. Mary’s.

That monument is part of Project Moses, a national nonprofit organization that strives to place Ten Commandments monuments across the United States, and to eventually build a monument in Washington, D.C.

Since 2004, the organization has placed 304 monuments in 38 states. The Knights of Columbus, a Roman Catholic fraternal organization, has spearheaded its efforts.

In Fargo, the Knights of Columbus also erected Ten Commandments monuments at Sts. Anne and Joachim and Nativity Catholic churches.

“I believe there should be a Ten Commandments monument at every corner,” Wilhelm says. “I believe that those commandment monuments should stay where they are down by the Civic Center as well as putting them up in front of our churches.” Fargo InForum