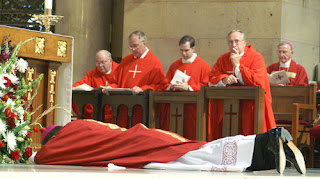 .
Bishop Peter Christensen said he is bringing a message of hope to the Catholic Diocese of Superior.

“We will strengthen what needs strengthening and celebrate that which is healthy and enjoy life together,” Christensen said after he was ordained Friday.

In an elaborate mass, Christensen’s ordination included bishops from other diocese and a procession of priests from the Diocese of Superior and elsewhere. It occurred in the ornate and vast Cathedral of St. Paul on a hill above downtown.

Seated at the altar, Christensen listened intently as a letter from Pope Benedict confirming his selection was read aloud during the mass. In it, the pope said Christensen was chosen in part for his “outstanding qualities and experiences.”

The Most Rev. Harry Flynn, archbishop of St. Paul and Minneapolis who led the ordination, urged Christensen to listen to those in the diocese and to “preach the word.”

“And when that word is rejected, have patience,” Flynn told Christensen.

Toward the end of the two-hour ordination, Christensen walked up and down the aisles, gesturing delicately and smiling as he blessed the people and priests who nearly filled the cathedral’s pews.

The ordination will be followed by Christensen’s official installation in the Superior Diocese Sept. 23. He is the 10th Superior Diocese bishop since it was formed in 1905. He will oversee 105 parishes in 16 northwestern Wisconsin counties, including Douglas and St. Croix.

He replaces Raphael Fliss, who has been bishop since 1985. Fliss’ last couple of years in charge of the diocese were tarnished by a scandal involving a Hudson priest, the Rev. Ryan Erickson. He was accused of killing two men in a local funeral home in 2002, but committed suicide before charges were brought.

Fliss, who sat next to Flynn during the ordination, and other bishops welcomed Christensen with a “kiss of peace,” a hug and brief words.

Born Christmas Eve of 1952 in California, the now-bishop attended a Catholic elementary school and graduated from a public high school. He became a self-employed potter, then worked with his father and sister in an art supply store. He eventually moved to Minneapolis, where he became an illustrator.

Christensen entered the St. Thomas University seminary in St. Paul at 28. He most recently has led a St. Paul parish[, the Nativity of Our Lord and its grade school. Prior to that, he was Rector of the St John Vianney College Seminary at the University of St Thomas in St Paul].

After he joined Flynn and other bishops in serving communion, Christensen stepped into the marble pulpit and intertwined his religious vision with gentle humor.

Christensen thanked his parishioners, and explained that his gift from them — a crozier, or pastoral staff — was delayed and almost did not arrive in time for the mass.

“It was supposed to be here a week ago and it came in at 8:30 this morning,” he said light-heartedly. “Thank you for praying.” Superior Daily Telegram

Terry of AbbeyRoads2 has some thoughts on Bishop Peter Christiansen