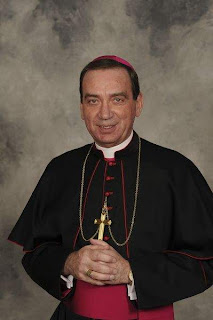 Schnurr becomes the 10th presiding bishop of the archdiocese since its founding in 1821.

The move follows Pope Benedict XVI’s acceptance Monday of Pilarczyk’s resignation, which he submitted when he turned 75 on Aug. 12, 2009, in accord with church law. Pilarczyk had been archbishop for 27 years, longer than any other currently serving archbishop in the United States.

“One year ago, when Pope Benedict XVI appointed me coadjutor archbishop of Cincinnati, I was humbled and honored,” Schnurr stated. “Today, after having had the opportunity to visit so many of our parishes, schools, and other institutions over the past months, I feel even more grateful and privileged. The welcome has been overwhelming, and I look forward to working with our priests, deacons, religious and lay people in building upon the solid foundation of faith that is so evident in our communities.”

Schnurr, 61, has a long background in the church as a canon lawyer, diocesan administrator, member of the papal nuncio’s staff, organizer of the first World Youth Day and general secretary of the United States Conference of Catholic Bishops.

The Iowa native was bishop of Duluth for seven years until being appointed coadjutor archbishop of Cincinnati.

Pilarczyk, a native of Dayton, Ohio, was the longest currently serving active bishop in the United States, as well as the longest-tenured archbishop. He is a nationally known churchman who was president of the National Conference of Catholic Bishops from 1989 to 1992.

Pilarczyk said the archdiocese “is blessed to be getting such a skilled, dedicated and spiritual pastor.” “FLOREAT,” Archbishop Pilarczyk added. “May he flourish.”

The Roman Catholic Archdiocese of Cincinnati is the 26th largest Catholic diocese in the country, with almost 500,000 Catholics, and has the eighth largest network of Catholic schools in terms of enrollment. It includes 218 parishes and 113 Catholic primary and secondary schools. Cincinnati.com
Posted by Unknown at 7:42 AM

The bishop really ;looks like Fred Lauer in this photo - doesn't he? Uncanny!

My thought was that the other photos must have been really bad. This one is not very flattering or appealing.

I'm not even sure who your Fred Lauer is? There was a bunch of them on Google, one of whom looked like Abp. Schnurr