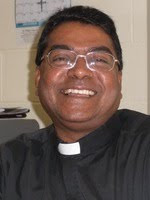 The Rev. Tony Fernando, a priest at St. Philip’s Catholic Church in Bemidji, was Mother Teresa’s pastor and served the poor at the mother house of Mother Teresa in Kolkata (Calcutta), India.

One evening while attending the Madrigal Dinner at Bemidji State University, a beggar character in the skit asked for the soup Rev. Tony Fernando was just about to taste.

Without a moment’s hesitation, Fernando, a priest at St. Philip’s Catholic Church in Bemidji, offered the bowl to the beggar, who accepted immediately. Little did the young actor know that he had asked for a donation from a man who served the poor at the mother house of Mother Teresa back home in Kolkata (Calcutta), India.

Fernando came to understand and appreciate Mother Teresa’s motives and persistence in her goals on many different levels. As a seminarian, he worked in one of the shelters. As rector, he worked in formation with high school students at a seminary. He was also her pastor in her home parish of St. Mary in Kolkata.

Fernando came about three years ago from the streets of Kolkata to serve as pastor in Red Lake Falls, Minn. His bishop asked some of the clergy to volunteer to go to the United States, where there is a shortage of priests, and as a way to repay the generosity of the church to poor nations.

Although he studied in Rome for a degree also for about a year at St. John’s University in Long Island, N.Y., he said the northern climate is colder than he had anticipated or even thought possible.

One of his parishioners from Red Lake Falls taught him how to drive, a skill he did not need back home, and others took him shopping for suitable winter gear for Minnesota winters.

Fernando worked with Mother Teresa especially in the formation programs for the girls who would like to be sisters in her congregation, the Order of the Missionaries of the Poor. There was a convent near the seminary where he was Rector of Minor Formation.

Fernando told of the times when at St. John Viennay Seminary near the Calcutta airport, he would receive a call from Mother Teresa before she left on an international flight.

He said she never thought it was an inconvenience because she felt it was important that she go with God when she went to visit other places.

“So, we would go to the chapel in the convent, for most of us felt that we could also participate in her spiritual journey by celebrating Mass with her,” Fernando said. “Most people would understand that in the Catholic tradition one begins a journey with God’s blessing.”

He said Mother Teresa had a special gift to recognize God in the people she served.

“She recognized that there is something beyond one’s self than just ordinary charity. She was drawn to these people in an extraordinary way,” said Fernando. “Some reporters asked her, ‘Mother, why are you doing this work? Is it just because you wanted to make the Hindus and Muslims into Christians?’ She answered, ‘Even if you give me millions of dollars, I wouldn’t be doing what I do. It is just because I see Jesus in these people that I do it.’ ”

Fernando said there are many reasons why we can do charity. You want to get rid of the person, so you give something and they will go away. You may be conscious that someone else is deprived and maybe should share what you have. Or you are working on some principle like this part of the world has more resources while another part of the world suffers so let us share. But in the case of Mother Teresa, it was the person who was suffering and her invitation from God to serve the poor that never changed. She always said she was a pencil in the hand of God – sometimes a crooked line or a straight line.

“For example,” Fernando said, “her desire to serve in China at the invitation of the government, was a kind of a push to go and serve for suffering people were there.”

When Chinese government officials told her she would have to come into their country dressed as a Chinese person, and not as a Roman Catholic nun, he said she had to decide whether she should go as a social worker or as a nun and she decided not to go. He said the second time the Chinese government invited her, she was told they would appoint the priests from their own state religion. She again thought about what she should do and decided it was not time for her to go there.

“This may have been one of the times where she suffered ‘a darkness of the soul,’ for discernment is a difficult challenge for all of us,” Fernando said.

He said Mother Teresa was noted for being very persistent in her goal. For example, she would go to the Communist headquarters in Kolkata and tell them she needed to have a place to house some homeless children and could she put them under the stairs. She insisted that once the office was closed for the day, the space was vacant and they wouldn’t disturb anyone.

The government allowed her to do that, but she did not stop at that, he said. The next time she had mothers and children in need of shelter, she asked for a part of the building, and, little by little, the Communist officials left their headquarters and gave the building to her.

Today, it is a home for abandoned children. Fernando said she worked, not for herself, but for the needs of the poor. Mother Teresa asked us to look at ourselves and when we do not like what we see, sometimes we are moved to change, Fernando said.

He told of another time when she asked the railroad company if she could put the lepers from town in the space alongside the tracks. Eventually, a haven for them formed along side the tracks where they receive medical care along with bed and board. The lepers spin the cotton to make the material for the nuns’ habits.

Fernando said Mother Teresa would not accept money or goods that were illegally gained by the donor.

“There was an industrialist who wanted to give her money, and she understood that it was ill gained,” he said. “She did not accept it because previously she had accepted gifts not thinking of where the money came from or how it was gotten, and she would not do that again.”

He said her order never invested in anything. Most orders have a hospital or school and the profits would be returned to their mission.

“She completely depended upon God, and she believed that what God wanted she could carry on,” he said.

Even after her death, people still recognize the worthiness of her cause and they continue to give and go to work as volunteers in her homes and shelters. Fernando will return to Kolkata after his assignment here in the United States is completed.