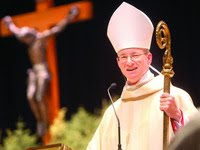 .
The DECC Auditorium was packed with camera-toting Catholics and civic leaders Monday as the Rev. Paul Sirba was ordained the ninth bishop of the Roman Catholic Diocese of Duluth.

People in attendance were treated to a rarely witnessed ceremony and a letter written by Pope Benedict XVI, appointing Sirba bishop.

Sirba, 49, succeeds Archbishop Dennis Schnurr, who was named coadjutor of Cincinnati more than a year ago. Sirba has served as a priest in the Twin Cities since 1986, and was appointed vicar general and moderator of the curia for the Archdiocese of St. Paul and Minneapolis by Archbishop John Nienstedt July 1. He was spiritual director at the St. Paul Seminary for three years before that. The News Tribune spoke with Sirba last week about his new assignment.

Q: Was it a hard decision to accept the bishop position?

A: As a priest, and I think for all of us really, it’s to try and do God’s will. I’ve had many different priestly assignments throughout my career. I have never asked for an assignment, but I have been able thankfully to say yes to the ones that have been asked of me. I might have wondered about the assignment but they’ve always turned out to be a beautiful assignment. In this case, when the nuncio calls, he’s calling (for) the Holy Father, Pope Benedict XVI, and making a request. Barring some really good reasons … if the Holy Father asks, I am humbled and will try and respond.

Q: What kind of sense of responsibility do you feel as a bishop?

A: The role of the bishop is three-fold. One is to teach, to introduce people and be able to preach about Jesus Christ. Also, to sanctify … and to lead or to govern, and that is to help give the proper guidance to the people entrusted to the care of the church, so that they might … know God in this life and to ultimately be with him forever in the next. That’s the responsibility of being a shepherd. I trust deeply in him and the wisdom and guidance of my brother priests and the people I will meet in the diocese of Duluth to help find the wisdom to do those things.

Q: What are some of the most practical challenges you see in this diocese?

Q: Is it rare to have two brothers from the same family in the priesthood? (The Rev. Joseph Sirba serves the Duluth diocese as a pastor at St. Edward’s Catholic Church in Longville.)

A: Peter and Andrew were brothers and James and John were brothers. My brother preceded me in the seminary. He’s been a good friend, good brother and mentor.

(During his remarks at the close of the ordination, Sirba spoke about his phone call with the most Rev. Pietro Sambi, the apostolic nuncio, or representative, to the U.S. for the Pope, telling him about his new assignment.)

“I wanted to say yes immediately,” he said. “But imagine my own surprise when the words that came out of my mouth were, ‘Are you sure you don’t want my brother, Fr. Joseph Sirba?’ ”

Q: What is the economy doing to church attendance and giving?

A: I suspect it’s not unlike down here in the Cities where people have been affected. People are unemployed, struggling to make ends meet. I know that has affected people’s contributions. In difficult times people do tend to ask deeper questions about the meaning of life and asking God’s help. Attendance might have been positively affected by people’s needs to find answers to some of these questions. We’re trying to do everything we can to assist people in their need. They might not be able to contribute resources the same way.

I was struck here at the Cathedral (of St. Paul), I had a Mass some months ago … at prayers of intercession … I had made the petition, pray for all those who are unemployed, who had lost their jobs. A fellow came up after Mass and said ‘thank you, I’d never heard anyone offer that petition before. I just lost my job a couple weeks ago.’ He was so grateful we were holding that up at church in prayer.

Q: In Catholic circles, what are you known for?

Q: What are your hobbies and food interests?

A: I love the outdoors. I like to hike, go for walks. I do go fishing. I like to travel, I like music. I lean toward classical. Listen to pop music or even country.

I like Italian (food). I actually have a good stomach. I enjoy different foods; a lot of ethnic stuff.

Q: What would you say to lapsed Catholics to urge them to attend Mass more often?

A: I’d love to extend the invitation to Catholics who, for whatever reason, haven’t been by for a while. There’s this great little program out there called Catholics Come Home. I’d love to have them come and reconnect with the church; whatever we can do to help them in their need.

Q: What can you do to keep young people connected to the church, and why is it often a struggle?

A: Part of that is because there are so many other things in culture that are drawing the attention of youth. It’s us trying to be more effective to introduce them to having a personal relationship with Jesus Christ. When we can do that they are definitely interested. (He cited a program for Catholic students at the University of Minnesota Duluth.) It’s trying to use some modern ways to help introduce them to Jesus. ... He doesn’t change, but the “busyness” of life … it’s hard to disconnect long enough sometimes to get connected to him. World Youth Days, that has been a great eye opener to me as another avenue to help young people get introduced.

Q: Have you ever met Pope Benedict XVI?

A: I met Pope Benedict XVI when he was Cardinal Ratzinger and he came to the University of St. Thomas in 1984 (where Sirba was a seminarian). He spoke at St. Thomas and said Mass in our chapel. I have since said Mass with him in Sydney and Cologne. … I also met him once over in Rome when he worked for the Congregation for the Doctrine of the Faith, when he was crossing the Piazza of St. Peter’s on his way to his office. I have not met him as pope.

I did meet Pope John Paul II in Rome at his summer residence. That was amazing. He was beloved by so many for great reason and a charismatic holy man. We had Mass with him and he came and individually greeted all the priests that were there. I was speechless. Duluth News Tribune

I was waiting for you to post on this - thanks! What a wonderful Bishop. Congratulations Bishop Sirba!

Does the practice of holding such ordinations in civic centers bother anyone else but me? Why not pack them in to beautiful Holy Rosary Cathedral and let the over-flow watch on big-screen? Sacred rites are out of place in sports arenas.

When Bishop Dennis Schnur was ordainted ten years or so ago they had the ordination in the same location.

Bishop Schnur had been the Executive Director of the USCCB before then and there was a plethora of representation presnt including three cardinals, a half dozen or so archbishops including one from the Soviet Union (Kondrusziewicz), and a plentitude of fellow bishops present to welcome him to the episcopacy.

They had to borrow a suitable crucifix from the Diocese of Superior as I imagine they did yesterday.

And, in my opinion, it is only half finished in terms of proper "decoration." The DECC does just fine.