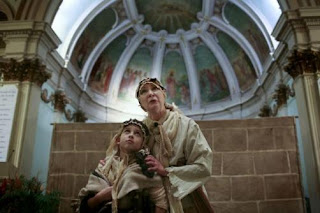 What: An operatic production of "Amahl and the Night Visitors" in English, 7 p.m. Thursday, Friday and Saturday.

Admission: Free, though a "good will offering" will be collected in support of Love Inc. Heartland, a church-focused charitable organization in Delano.

At the base of the Crow River on the western fringes of the Twin Cities metro area, Delano looks like any other small Minnesota town. There's the historic downtown, the simple homes on a perfectly angular street grid, and the ever-growing array of fast-food stops and gas stations.

But step inside the nave of St. Peter's Church and another side of the town emerges.

Above, a sweeping, barrel-vaulted ceiling is affixed with hundreds of ornate medallions. Massive columns throughout the sanctuary are encircled with gold leaves. The domed ceiling above the altar has wonderfully detailed Renaissance-style murals, hand-painted by Danish artist Andrew Pederson. The triple arch over the sanctuary -- commissioned by former priest Martin Savs -- is said to be proportional to the Arc de Triomphe in Paris.

"A lot of people don't expect to see this in a small town," said Gary Janisch, a St. Peter's parishioner and longtime Delano resident, as he gestured around the cream- and gold-tinged space. "It's our very own mini-cathedral."

And the perfect setting this week for a three-show production of the one-hour English opera "Amahl and the Night Visitors" Thursday through Saturday.

The story goes that St. Peter's was built in 1913 by German immigrants who thought Delano deserved something as grand as the big cities. Undoubtedly, there was also some degree of competition with the other Catholic church across town, one attended by Polish immigrants.

The elaborate design of St. Peter's continues to be a point of pride in Delano. As does the production of "Amahl and the Night Visitors," which the church also presented 2004 and 2006.

Like their grand-minded church founders, the cast and crew of this production are determined this will not be a humble small-town event.

Parishioners at St. Peter's are fronting roughly $10,000 to put on a show "as moving as anything you'd see in Minneapolis," said Janisch, production manager and husband of the show's star, Peg Janisch, who performs as "The Mother."

Professional lighting will be brought in and the singers will be accompanied by live music. A local custom furnituremaker, Tony Schaust, used aged butternut and reclaimed Douglas fir to make full-scale furniture pieces for the set. "The time period is just before Christ's birth, so I felt the rustic nature of these woods was appropriate," Schaust said.

Invitation-only auditions were held in July for the role of Amahl, the poverty-stricken crippled boy who is miraculously healed when he gives up his crutch as a present for the newborn Jesus. Alyssa Trautman, a second-grader from Delano, earned the role and said she has practiced "about 154 hours" since August, which is most certainly an eternity to a 9-year-old. Director Linda Schaust hand-stitched 20 costumes, choosing a monochromatic array of natural fibers such as tea-dyed muslin and nubby woven yarns. For Amahl's wardrobe, she took a hand-stitched coat of felt and ran it across a belt sander for a look of distressed shearling.

The production itself may not be as long-lasting as the elaborate architecture of St. Peter's, but cast member Rich Kubista, one of the three Magi, said it will be just as prayerful and haunting. "The music totally gets me on a Christian level," he said. "Every time we sing the miracle scene, I get shivers up my spine." Alyssa Ford, StarTribune