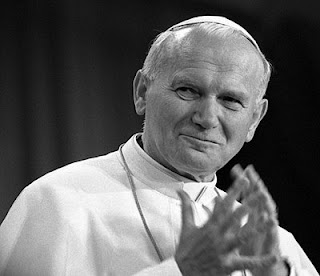 As expected, this morning the Pope approved 21 decrees advancing causes for beatification and canonization... and, suffice it to say, the slate is full of notable names.

Among others, B16 declared:

This is wonderful news for all. I love that JP II and Pius XII are included together - it reminds me of how John XXIII and Pio IX were beatified together - that whole hermeneutic of continuity thing.

Praise God! I'm so grateful to be Roman Catholic.

Yes, it is wonderful news.

But Abe Foxman and his ilk are already getting ready to increase their fundraising efforts by bashing Ven. Pius XII for not mobilizing the Swiss Guards and eradicating the Nazi Wehrmacht.

It is so absurd that they criticize him for not doing something that nobody else was able to do and that took millions of soldiers, sailors and airmen to accomplish.

I have no doubt that they just use this for fundraising.

The Jews got Israel back about 1,900 years after fleeing from it. That never would have happened had it not been for the Holocaust. They never mention that.

Yes it is great that Fr. Jerzy is on the list. He and thousands of Poles in Solidarnosc (Solidarity) were key figures in the fall of the Iron Curtain.

And it was obvious that he was a martyr and a saint.

Excellent entry! I'm been looking for topics as interesting as
this. Looking forward to your next post.