Argument of the Month Club

A Men's Forum for Catholic Apologetics

Second Tuesday of the Month, from October through May
Church of St. Augustine, South St. Paul, MN

“Why Catholics MUST ENGAGE In the Public Policy Debate!” Tuesday May 13th Speaker: Jeff Davis Founder of www.minnesotamajority.org


Jeff Davis is a businessman turned activist. In 2004, Mr. Davis founded an organization called Minnesota Citizens in Defense of Marriage to lobby for passage of the Minnesota Marriage Amendment. Prior to this time, Mr. Davis had never been actively involved in politics. However, after learning how some Minnesota state legislators were stonewalling the marriage amendment bill, he felt compelled to become involved in this issue. Mr. Davis worked for three years in an attempt to win the right for Minnesotans to vote on this issue. After being repeatedly denied this right, Mr. Davis organized an effort which resulted in the defeat of the Senate Majority Leader in 2006, something that had never before been accomplished in the history of our state. After the election, Mr. Davis launched a new organization called Minnesota Majority which focuses on defending traditional values in our state’s public policy arena. Mr. Davis is a Catholic and the father of three young children. He and his family reside in St. Paul, Minnesota. 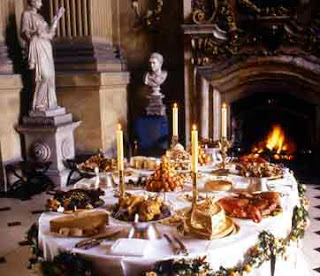 Dinner: Garlic and Herb Marinated Grilled Sirloin Smothered in a three cheese mushroom sauce covered in cheese on a bed of noodles (Stroganoff )


Tuesday, May 13th Social at 6:30pm (beverages and appetizers) Dinner at 7:00pm Total cost for the evening is $12 at the door
Enjoy a great meal, hear an excellent speaker, and challenge him after dessert. Men of all creeds and ages are welcome to join in the good humor, food, and fellowship. Priests and seminarians get in free but will not be shown partiality in debate. Fathers are encouraged to bring their minor sons.
Posted by Unknown at 9:56 PM

All that refined and dignified photo needs is the butler stolling over with the humidor after dinner.

I know it's staged because I don't see the foosball table in the shot.

The tiramisu is just vanilla wafers with redi-whip in a bowl right?