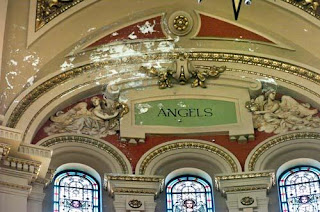 .Plaster high in the dome of the Cathedral of St. Paul shows water damage that occurred before a leaky roof was replaced six years ago during a $32 million renovation. Cathedral officials say repairing the damage — peeling paint and plaster and corroded stonework — will cost nearly $14 million.

The leaking in the dome of the Cathedral of St. Paul may have been fixed several years ago, but officials are still dealing with its costly consequences. Water damage — peeling paint and plaster and corroded stonework — could threaten the long-term integrity of the structure, they say.

The cathedral's fundraising arm is trying to gather the nearly $14 million it will take to repair the interior — including $2.5 million to rebuild the organ.

"It's certainly serviceable," said John Mecum, architect in charge of the project. But "it's started to look a little tattered."

The grand old dame is one of the city's main landmarks and mother church for Twin Cities Catholics. It's on the National Register of Historic Places, built between 1906 and 1915 at a cost of $1.5 million.

After about 85 years of service and a number of patches, the copper roof was replaced in 2002 as part of a $32 million renovation.

But a tour of the structure reveals damage in a number of areas:

It is amazing to see the cost to renew a beautiful Church like St. Paul's. Let's pray they raise the money and use it well to maintain the church. God bless! Padre Steve