His own man, the most Reverend John C. Nienstedt 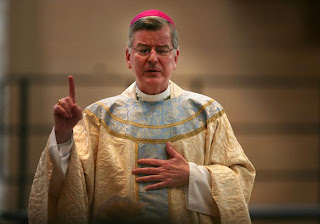 Archbishop John C. Nienstedt spoke during a sermon
at John the Baptist Catholic Church in New Brighton
Wednesday as part of the Holy Eucharist and May Crowning Mass
.
Those who have worked with John Nienstedt, the new Catholic archbishop, say he defies easy labeling.

John Nienstedt was greeted at the Chancery door by high hopes and no small measure of trepidation.

The man who on May 2 started his tenure as archbishop of the 650,000 Roman Catholics in the Archdiocese of St. Paul and Minneapolis arrived with a moving van of preconceptions about him.

He was described as "rigid," "ultra-conservative" and a "hard-liner." Progressive parishes grew edgy as bloggers spread the word that he was out to "get them" and already was making a hit list of potential targets. Gay Catholic activists worried that hard-won programs would disappear.

For Nienstedt, 61, who was used to a different pace and level of scrutiny as bishop in New Ulm, such an onslaught before he even figured out how to work the phone in his new office is frustrating. An avid hockey fan -- he grew up in Detroit during the Gordie Howe era -- Nienstedt feels as though he has been checked from behind.

He waited in the wings during a 10-month transition that ended nine days ago in the retirement of the gregarious Archbishop Harry Flynn. Now, as he ascends to the peak of his career so far and moves into a new office at the summit of Summit Avenue in St. Paul, Nienstedt has a simple request:

"All I'm asking is that people have an open mind. At least they should get to know me and see for themselves."

He recalls his first taste of how different this job would be, on the day when Flynn introduced him as his coadjutor -- an assistant and heir apparent. "The first morning I was here there was a press conference, and I thought everything went fine," Nienstedt said. "But by the time I got back to New Ulm, people were digging through every talk I'd given looking for any little thing they could pick out."

The fact is, Nienstedt has taken some controversial positions and he's not retreating from anything. Transcripts of his pastoral letters, homilies and speeches are still posted on the Diocese of New Ulm website -- including those that brought a hue and cry from some quarters. He's not shy about expressing his opinion on everything from same-sex unions to stem-cell research to later bar-closing times. (He's opposed to all three.)

But those who know Nienstedt best say he will confound anyone who tries to pigeonhole him.

"This is not a man you can put into a box," said Mark Kemmeter, his chief of staff in New Ulm. "He's much too complex for that. I suppose that you could say that he's theologically conservative and pastorally progressive, but Archbishop Nienstedt ultimately will defy any label you try to put on him."

From 'Harry' to hockey

Nienstedt admits to being more than a little cerebral. His casual reading often involves a tome on theology or philosophy.

But then he begins to defy first impressions. He owns all of the Harry Potter books. His favorite movie is the romantic comedy "Moonstruck."

He reads the sports section every morning, likes to ski and loves to sit behind the bench at Minnesota Wild games (although occasionally he overhears words that don't come up much at church).

And he sings -- socially as well as during mass. If he invites you to dinner, which he did last week with a group of seminarians, be prepared to literally sing for your supper.

"We sang religious songs, of course," he said. "But we also sang 'Take Me Out to the Ballgame.'"

He grew up in Detroit as the second oldest of six children: "Three girls, three boys; very democratic," he said.

He was ordained in 1974, then went to Rome to get his advanced degrees. When he returned to the United States, he was appointed pastor of the Shrine of the Little Flower in the Detroit suburb of Royal Oak.

Although he argues that he's still a pastor at heart, he has spent the past 12 years in administrative roles, starting with appointment as an auxiliary bishop for the Archdiocese of Detroit. When the order came from the Vatican sending him to New Ulm, he was somewhat taken aback.

"I was born and raised a city kid," he said. "How was I going to fit into a small town?"

In fact, he fit in so well that lately he has been struggling to readjust to city life. "I got spoiled. If you want to go someplace in New Ulm, you just get in your car and go. It's clear sailing. I'm not used to sitting on congested freeways," he said.

The past 10 months have been a boom-bust cycle for him emotionally. His career reached new heights, but in the course of six weeks this winter, both of his parents died.

He got to Detroit in time to say a final goodbye to both, "and I feel very blessed by that," he said. "And I preached at both their funerals. It was a difficult moment, but a meaningful one, too."

While his parents didn't get to see him assume the full duties of his job, Nienstedt smiles at their memory and says, "I think they're watching."

No shortage of leadership challenges face any new archbishop. But Nienstedt assumes the role at a time when American archbishops often are caught in the middle of an increasingly conservative Vatican hierarchy and a sometimes rebellious American Catholic Church.

When Flynn ordered an end to lay preaching at mass this year, it was Nienstedt who was publicly rebuked. Among the most vocal: members of St. Stephen's Catholic Church in Minneapolis, who recanted their statements about him when they learned other churches in other dioceses received the same edict.

Asked why he never defended himself, Nienstedt shrugged his shoulders. "Change can be very difficult for some people," he said.

Although he has not met Nienstedt, Michael Bayly, executive coordinator for the Catholic Pastoral Committee on Sexual Minorities, predicts that the archbishop will provoke more vocal dissent.

"I think his [forceful] approach is going to make all Catholics take a stand," said Bayly, who also publishes the online Progressive Catholic Voice and runs the Wild Reed blog. "I think more people will be willing to stand up and say, 'No, you're wrong.'"

Reacting to Nienstedt's opposition to gay relationships, Catholic Rainbow Parents said his stance "gives license to hatred and violence against all of us."

None of this has sent Nienstedt into hiding. Just the opposite: He has been on a mission to visit as many parishes, schools and retirement homes as he can.

"I'm on the road a lot. I want to meet the priests and pastoral leaders. A diocese is only as strong as its parishes."

During his time in New Ulm, he preferred to lead by consensus, Kemmeter said. When that diocese, like many, needed to close parishes, he insisted that the people affected make the decisions. "He got all the priests together and discussed it," he said. More discussion ensued before they worked through 15 drafts of a report.

"You can have a disagreement with him and still enjoy a meal together afterwards," said the Rev. Douglas Grams, Nienstedt's vicar general in New Ulm who has been filling in there. He said Nienstedt will tell you what he thinks, not what he thinks you want to hear.

Nienstedt will face plenty of difficult issues. Part of the tension between the Vatican and U.S. Roman Catholics is because many Americans want to expand involvement by women and give laity more input into decision-making. Last year's reinstatement of the Latin mass revived complaints of anti-Semitism. There are lingering concerns from the clergy sex abuse scandal.

Closer to home, Nienstedt sees three core challenges: establishing trust with the priests in the archdiocese, restructuring a downsized staff at the chancery and reducing the archdiocese's debt level. The annual Catholic Appeal remains $1 million short of its $9 million goal.

Although some observers have opined that Nienstedt might end up back in Rome -- speculation based mostly on the fact he studied there -- Nienstedt insists that he's in the Twin Cities for the long haul.

"I plan to retire here," he said. "I plan to be buried here. I made the mistake of telling that to my mother, who was upset that I wasn't going to be buried in the family plot. But I truly believe that a bishop's place is with his parishioners, in death as well as life." JEFF STRICKLER, Star Tribune