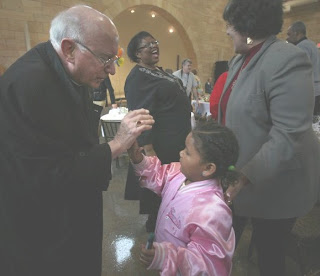 .
Archbishop Harry Flynn officially retired Friday, stepping down as leader of the Archdiocese of St. Paul and Minneapolis at 5 a.m. -- noon Vatican time, according to tradition.

Archbishop John Neinstedt, who had held the title of coadjutor archbishop since June 29, now becomes the eighth archbishop of the diocese.

"I especially wish to congratulate Archbishop Flynn on his 75th birthday, and thank him for the wonderful witness to Jesus Christ that he has given here for almost 14 years," he said in a statement.

"I am so grateful that he is planning to stay in the local area and be available for consultation. I know I can stand tall on the shoulders of Archbishop Flynn and his predecessors."

Flynn, who had led the archdiocese since 1995, on Friday reached the mandatory retirement age for archbishops. Some local Roman Catholics thought he would continue in office for as long as another month because he was filling his calendar with appointments.

"I knew it was going to happen today," Flynn said, on his way to a lunch. "I submitted my retirement [paperwork] a couple of months ago, and it was at least three weeks ago ... that I received notification back from the Vatican" about the date.

He said he intends to honor all of his commitments. "I have many, many engagements over the next month," he said. "I'll be busy."

He spent the morning at the State Capitol rallying support for a minimum wage bill, spoke at a luncheon sponsored by the St. Paul Council of Churches and then flew to Louisiana for a celebration of an associate's 25th year as a rector.

The Rev. Grant Abbott, executive director of the St. Paul Council of Churches, surprised Flynn with a birthday cake and rendition of "Happy Birthday." But he didn't realize until Friday morning that the speech would turn out to be the archbishop's farewell address.

Abbott's counterpart at the Minneapolis Council of Churches, the Rev. Gary Reierson, said: "Harry Flynn has brought a focus and an energy that has made a huge difference in Minnesota but also in arenas that go far beyond this."

A focus broad and narrow

The Rev. Peg Chemberlin, executive director of the Minnesota Council of Churches and president-elect of the National Council of Churches, marveled at the way Flynn served as administrator of an immense organization -- the archdiocese serves 650,000 Catholics who worship in 218 parishes -- without losing his ability to connect on a one-to-one basis with parishioners.

"He has a pastoral heart," she said. "He has a very open, caring presence."

Flynn will have an office and a residence on the St. Paul campus of the University of St. Thomas, where he will serve as chairman of the board of trustees and co-chairman of the capital campaign.

"I'm looking forward to mingling with the students and getting them fired up," he said.

His last speech focused on what has become a familiar theme during his tenure: the relationship between religion and social justice.

"Loving your neighbor is personal, but it also has a social dimension," especially when it comes to the global community, he said. Noting that he has been criticized for speaking out on issues such as racism, he took one last chance to address his critics.

"Some people said I was overstepping my bounds," he said. "They said that the church isn't a place for public deliberation. But I ask you: Is there a better place? If we remain silent, who will be the voice of the values that we hold dear?"

A native of New York, Flynn was ordained in 1960. In 1986, he was appointed bishop of the Diocese of Lafayette (Louisiana), a position he held until 1994, when he was named coadjutor to Archbishop John Roach in the Twin Cities. Roach retired the following year.

In a special issue of the archdiocese newspaper, the Catholic Spirit, commemorating Flynn's retirement, Nienstedt wrote that he offered his predecessor a celebratory mass at the St. Paul Cathedral, but that Flynn declined, "stating that he would rather say farewell in smaller groupings." StarTribune