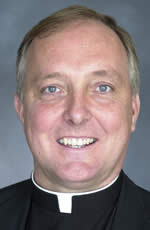 .
As Archbishop John Nienstedt begins his ministry as the ordinary of the Archdiocese of St. Paul and Minneapolis, he inherits a church and central administration that has undergone significant change in the past few years.

Just where has the archdiocese been?

What brought about the need for changes?

And what is the vision that has guided the strategy for ministry today as a new archbishop takes the reins of leadership?

Father Kevin McDonough offered answers recently at the annual archdiocesan Ministry Day, a gathering that drew some 700 lay and ordained professional ministers from parishes, archdiocesan offices and ministries affiliated with the archdiocese.

As vicar general and moderator of the curia for Archbishop Harry Flynn, Father McDonough has been the now-retired archbishop's right hand. He has both been privy to and directed decisions affecting the 750,000 Catholics in the 12-county archdiocese.

A financial need drove changes in the archdiocese.

"The central administration did not have the cash on hand to meet current and anticipated obligations," Father McDonough said, and that forced archdiocesan leadership to get a clearer picture of its cash flow and then cut back on expenses.

There were limited cuts to subsidies, no cuts to direct-services staffing, such as prison chaplains and campus ministry, and significant cuts in administration and governance staffing. The archdiocesan central administration has shrunk from 130 employees to 80 employees currently.

How did the archdiocese get into a financial crunch?

It wasn't the clergy sex abuse scandal, Father McDon­ough said. The archdiocese dealt with many of those issues years earlier than, say, the Archdiocese of Boston did, and has not had the multimillion dollar judgments that have bankrupted other dioceses.

The archdiocese does, however, have the continuing expense of the cost of care for victims and a massive program to ensure safe environments.

"Was there overspending of our budget? To some degree, yes," Father McDonough said. "There was a tendency for unbudgeted expenses to occur."

Revenue sources did not fail, with one exception, he noted: Too many parishes were paying the archdiocesan assessment with IOUs.

Although, on the whole, parish income has been rising at the rate of 6 percent, some parishes have been facing rapidly declining funding.

Some parishes took on too much debt in the better economic times of the 1990s, Father McDonough said. "Parishes counted on more rapidly expanding giving than has proven correct," he said.

However, a major trend that bears continuing oversight is the growing income gap between wealthy and poor parishes.

"In the '40s, '50s and '60s, wealthier parish incomes were perhaps twice that of poorer parishes. Today that percentage is five or six or seven times," Father McDon­ough said.

More than 30 years ago, under the leadership of the late Archbishop John Roach, the archdiocese began a process of management by objectives. Through the intervening years, the archdiocese has updated its pro­cess in various ways, including parish-based planning that was put in place in 1988.

However, as he viewed the archdiocesan operations from the seat of the vicar general over the past decade or so, Father McDonough said he saw a need for organizational planning that was data informed and mission driven.

"Archbishop Flynn, from his perspective, does not believe a management structure exists that fits the mission of the church," Father McDonough said.

The tack the archdiocese has been taking, therefore, is best described as "an ecclesial vision of 'communio,'" he said, an attempt to re-connect the archdiocesan staff with the office of the archbishop.

"The cash flow problems [of the central administration] reflect a disconnect between downtown [the chan­cery and ministries] and parishes," Father McDonough said, "and they reflect the disconnect between the parishes and the street."

Father McDonough said Archbishop Nienstedt has signaled some of his thoughts and priorities through his columns in The Catholic Spirit and in talks he has given during the past year. Three items stand out from those signals, he said: The archbishop's loyalty to the Holy Father, a focus on family life and reverence for liturgy.

On the organizational issue, Father McDonough said the central administration has slowed down some changes so the new ordinary could build a better team.

"He thinks we're poised to move ahead," Father McDonough said.

However, Father McDonough added, that movement will happen without him in the driver's seat. Arch­bishop Nienstedt appointed Father Lee Piché as the new vicar general and moderator of the curia. One of Father McDonough's new pastoral assignments is to serve as director of the archdiocesan Office for Protection of Children and Youth Initiative. Both appointments are effective June 16. Catholic Spirit

Hmmm...sounds like the same report the City of St. Paul just gave on why they have a serious budget shortfall: "like, d'uh, unforseen ---- happened"

Ok, what kind of a final report is this anyway? Uh, sorry, our finances are screwed up. Peace-out? My sucessor will have a lot of work to do-Love ya! I'm off to my new position, don't call me!?

I'm being a cat and a goofball, but, seriously, this is upsetting.

From the article, citing McDonough:

"Father McDonough said Archbishop Nienstedt has signaled some of his thoughts and priorities...Three items stand out from those signals, he said. The archbishop's loyalty to the Holy Father, a focus on family life and reverence for liturgy."

A revolutionary change in the Archdiocese, on all three counts. I like the special emphasis on THE ARCHBISHOP'S loyalty to the Holy Father, as if it's a personal quirk of his to have such loyalty.

Fr. McDonough is dearly loved by the Hispanic community and his parishoners at St. Peter Claver. I'll bet he is happy getting out of the chancery - it has been a long haul.

And he is a very talented priest/man. After a bit of relaxation, maybe he could be used as a "Vicar for Ethnic Communities" or something like that.

They are the future of the Church around here.

What few children we whites are producing aren't being taught the faith by us or many of our priests. Few are hanging on to it as adults.

The prevention of childhood sexual abuse of all of God's children.

Mark my words, Fr. Kevin will lead all the religious communities to the summit tables where the other factors of our society are working on solutions to the prevention of our primary social sickness "childhood sexual abuse."

A wise and positive pastoral decision.